With both the S&P 500 and Nasdaq Composite in correction territory, many investors may be worried about the current market conditions. But savvy investors know that these pullbacks are temporary and are a great time to add to your portfolio with stocks discounted from their previous highs.

At first glance, a “forever” holding period might seem a bit crazy, bordering on irresponsible. But hear me out. Berkshire Hathaway CEO and renowned investor Warren Buffett has been known to say, “Our favorite holding period is forever.” Given his tremendous track record of success, investors would do well to heed this advice.

Given this context, we asked three longtime investors what stocks they’d invest in right now with the intent of holding forever (or at least a decade or two). They came back with a “triple-A” list of stocks (pun intended): Apple (AAPL 1.30% ), Amazon (AMZN 1.61% )and Atlassian (TEAM 1.14% ).

Apple: A rock-solid port in a storm

Danny Vena (Apple): The Nasdaq Composite began its decline into correction territory in mid-November, and since then the majority of high-growth stocks have taken it on the chin. Investors might be surprised, therefore, to learn that one of the stocks that beat the market handily in 2021 is also outpacing both the Nasdaq and the S&P 500 index so far this year. That stock is Apple.

The iPhone maker may not be the first company that comes to mind when considering a safe haven, but there are plenty of reasons Apple has become a port in the tech-related storm. The tech giant has defied the odds by maintaining its title as the world’s largest publicly traded company. Apple’s market cap briefly surpassed the $ 3 trillion threshold earlier this year, and it likely won’t be long before it tops that watermark for good. I can hear some investors thinking, “Biggest doesn’t always mean best.” Fair enough.

Apple also topped the global smartphone market to close out 2021, garnering a 22% market share in the fourth quarter. That adds to the company’s installed base of more than 1 billion active iPhones worldwide.

Why does that matter? It gives the company a large target market for its long and growing list of services, including Apple Music, Apple TV +, Apple Fitness +, and Apple News, just to name a few. These are just the latest additions to join perennial revenue generators like iTunes, the App Store, and iCloud. In fiscal 2021, these services (and others) generated more than $ 68 billion, representing nearly 19% of Apple’s total revenue.

iPhone sales continue to be Apple’s cash cow, growing 39% year over year in 2021 and generating revenue of nearly $ 192 billion. That could be just the beginning, as some analysts estimate that 25% of active iPhones are in the upgrade window, setting Apple up for a multi-year “super cycle.” Apple kicked off fiscal 2022 by setting an all-time revenue record of $ 123.9 billion, up 11% year over year, led by iPhone record revenue of $ 71.6 billion. Strong demand for its flagship device suggests that this super cycle is just getting started.

Apple also notched “all-time high” sales of Mac computers, wearables, and services in the first quarter, providing the company with plenty of growth opportunities beyond the iPhone.

Finally, there’s Apple’s rock-solid balance sheet, with more than $ 79 billion in net cash. The company also boasts profit margins of nearly 28%, and hefty profits fuel its ever-growing dividend, which has increased by more than 132% since 2012. Apple also boasts a payout ratio of less than 15%, securing its dividend even in the toughest of times.

Given the enviable demand for its product and services lineup, as well as the safety and security of its dividend and rock-solid balance sheet, it’s easy to see why Apple has become a port in the storm for tech investors. Amazon: Buy into one of tech’s biggest success stories

The company’s e-commerce dominance worked to its advantage during the pandemic as it allowed people to shop when COVID-19 made in-store shopping riskier. Even though e-commerce sales have fallen as consumers again shop offline more often, Amazon’s North American and international e-commerce sales still rose 6% in the fourth quarter.

The size of this revenue also speaks to the company’s market influence. Amazon brought in $ 408 billion in North American and international e-commerce sales in 2021. This lags only Walmartwhich reported $ 573 billion in total revenue over the same period.

Secondly, Amazon also began the cloud computing industry. The cloud has transformed the tech industry by bringing on-demand power and data storage to enterprises in virtually all industries.

Amazon continues to hold the largest market share in the cloud infrastructure market, according to ParkMyCloud. Also, Grand View Research predicts this $ 369 billion industry will grow at a compound annual rate of 16% through 2030, and Amazon Web Services (AWS) positions the company to reap much of that benefit.

AWS reported over $ 62 billion in net sales in 2021, a 37% increase from year-ago levels. Despite making up a relatively small percentage of the company’s revenue, AWS accounted for $ 18.5 billion of the company’s $ 22.9 billion in operating income in 2021.

But even with that success, Amazon stock has struggled more recently. It has fallen 9% over the last year, though it holds up well in an environment where many tech stocks lost more than two-thirds of their value over the same period. Additionally, its P / E ratio has fallen to 45, dramatically reducing the gap with its slower-growth rival, Walmart, which sells for 28 times earnings.

Admittedly, the recent slowdown in e-commerce growth and the struggling stock price may concern some investors. However, Amazon could deliver higher operating profits in 2022, especially with AWS generating most of its operating income. This means that cloud computing can hold investors in good stead even if e-commerce struggles for a time. 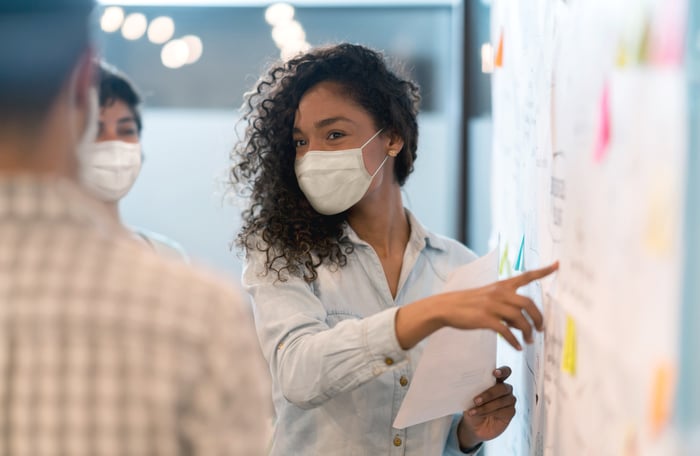 Atlassian: A company with a timeless mission

Brian Withers (TEAM): Atlassian is one of the stocks that I would consider in a small group of “never sell” companies. I may sell someday, but right now, I don’t see any reason why I wouldn’t hold this software team collaboration specialist for the next couple of decades. One of the key reasons is its mission: “To unleash the potential of every team.” It’s easy to understand and can stand the test of time. Founded in 2002, this company has grown into a $ 2.7 billion annual revenue run rate business and its co-founders, Scott Farquhar and Mike Cannon-Brookes, are still running the company as co-CEOs.

But investors are always looking at “what have you done for me lately” and judging whether the company can continue to grow. Let’s answer both of those questions. First, the latest performance is stellar. As it moves to an all-cloud platform, the company is not only seeing solid top-line growth, but its cloud revenue is accelerating. Additionally, it continues to attract customers at a rapid pace. Its broad set of collaboration software tools are driving this great performance.

But what about the future? In its investor day presentation from November 2020, management estimated it has an addressable market of $ 24 billion. Given its $ 2.7 billion revenue run rate, that’s lots of potential growth ahead. Additionally, looking at the opportunity through the lens of monthly active users (MAUs), the potential is even bigger. From that same presentation, the company had 15 million MAUs. Compared with 145 million software and technical professionals and 1.1 billion knowledge workers globally, its goal to get 100 million MAUs is certainly feasible.

Lastly, the market correction and general tech sell-off has brought the stock down over 35% from its high late last year. The stock may still feel pricey at a 31 price-to-sales ratio, but if investors are holding for the next decade or two, you should see market-beating performance. Maybe it’s time to pick up a few shares.