Dounreay Site Restoration Ltd (DSRL) and the Robotics and Artificial Intelligence in Nuclear (RAIN) Hub are collaborating to develop a robot capable of accessing areas that are inaccessible or unsafe for humans to work in. The announcement came as the first network of robotics and artificial intelligence collaboration hubs across the UK was launched.

Lyra was used to survey an underfloor duct at Dounreay (Image: DSRL)

In 2020, a group of engineers from RAIN Hub – a consortium of universities led by the University of Manchester – brought a small surveillance remotely-operated vehicle equipped with sensors, cameras and a manipulator arm to Dounreay. Initial trials in an inactive building provided useful information, and a limited survey in the laboratories took place in 2021.

As a result of this field research, a second-generation robot called Lyra was developed, with an improved package of surveying measures including a detection system that uses lasers, multiple angle cameras, radiation probes and the ability to take swabs using the manipulator arm.

In February, the robot returned to Dounreay to carry out a survey of a 140-meter-long underfloor duct which runs under the central corridor between laboratories, providing useful information that will help solve the challenge of decommissioning it.

“Now the characterization survey is complete we have built up a very comprehensive picture of the duct, which will help us make informed decisions on how the duct should be decommissioned,” said DSRL Project Manager Jason Simpson.

“We wanted to demonstrate that the robot could be used successfully in active areas,” added RAIN Hub Director Barry Lennox. “We added fail-safe devices, including a remote ‘reboot’ switch, and a winch to enable us to physically retrieve the robot if it got stuck on the debris in the duct. The survey has demonstrated Lyra’s reliability in active areas.”

A new facility in Whitehaven, Cumbria, will be the first network of robotics and artificial intelligence collaboration hubs across the UK. 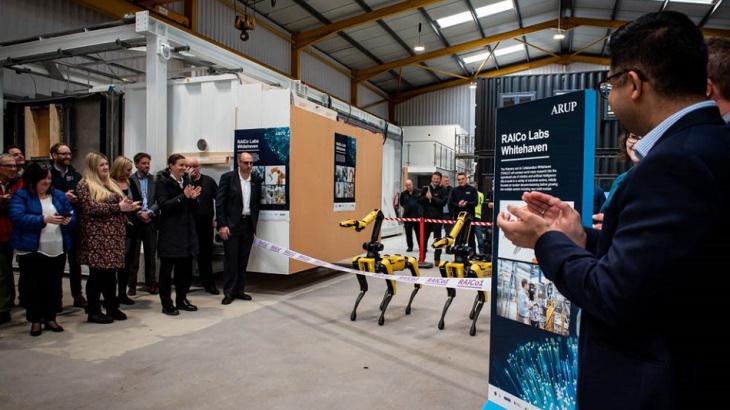 The facility – known as RAICo1 – will ultimately be used by Sellafield Ltd, supply chain partners and academia to develop the technology needed to decommission nearby Sellafield and other sites like it.

RAICo1 is a joint initiative developed by Sellafield Ltd and the Nuclear Decommissioning Authority (NDA) in collaboration with the UK Atomic Energy Authority (UKAEA), Manchester University and the National Nuclear Laboratory.

Offering the ability to test technology in environments that mirror those on the Sellafield site, such as gloveboxes and water tanks, the facility removes some of the challenges associated with working on the nuclear site.

“We know we can deliver the UK’s nuclear decommissioning challenge safer, faster and at less cost by using robotics and artificial intelligence,” said Sellafield’s Chief Operating Officer Rebecca Weston. “RAICo1 is a real step towards achieving that. It brings together the owners of the challenges with the people who have the ideas and technology that can solve them.”

“UKAEA and NDA need remotely operated tools that are efficient, reliable, cost-effective and re-usable,” added Rob Buckingham, director of remote applications in challenging environments, UKAEA’s robotics facility. “The next generation of robotics and smart machines will deliver our mission faster, cheaper and at lower risk. Learning together, in collaboration to avoid duplication, has to be the best way.”