First responders are called upon to face a growing list of dangers, ranging from a humanitarian crisis in Ukraine and wildfires in North America to mudslides in Brazil and floods in Australia.

In 2021, natural disasters resulted in damages exceeding $ 320 billion, making it the third-costliest year on record. Each of those dollars represents a risk taken by a first responder — a risk that may soon prove to be unnecessary thanks to automated technology.

Our first responders face stiffer challenges than ever before. The number of U.S. public safety officials who died on duty surged by 43 percent from 2020 to 2021, and the catastrophes that make their services necessary are growing — not just in the U.S.

A United Nations report on disaster-related losses and fatalities found that, between 1988 and 2017, 1.3 million people lost their lives to climate-related and geophysical disasters.

First responders continue to answer the call, even when pushed to their limits. In the US, only 13 percent of on-duty firefighter deaths reported in 2021 were due to burns and other injuries. Fully 54 percent were due to overexertion.

In an increasingly volatile world, robotics and artificial intelligence can provide an extra level of safety.

Existing support for first responders is impressive on its own terms but woefully insufficient in practice. Systems like FirstNet in the US, the UK’s ESN, and the EU’s BroadWay are designed to provide mission-critical communication services to our first responders.

But robotics and AI can enhance the mobility and effectiveness of first responders while minimizing the risk of physical injury.

Several recent and upcoming projects may soon cause us to rethink the roles of humans and machines in crime-prevention and disaster-response scenarios.

A research team at the University of Michigan recently received a $ 1 million grant from the National Science Foundation to develop a bipedal robot designed to assist search and rescue operations. This robot will be trained to navigate areas deemed dangerous for first responders, including collapsed buildings and unstable areas in disaster-prone regions.

“Spot,” a four-legged robot, allows police to minimize the risk of violent encounters by entering high-risk areas like those linked to suspected narcotics manufacturers and distributors, where it gathers information and shares it in real time with remote human operators.

Future revisions of Spot and robots like it may prove exceptionally useful in crime scene analysis and evidence gathering.

Xavier is equipped with a bank of sensors that scan for undesirable social behaviors, like smoking in prohibited areas, illegal hawking, improperly parked bicycles, and more. Once it detects such unlawful activities, it alerts public safety officials, who then get involved in remediating the incident. 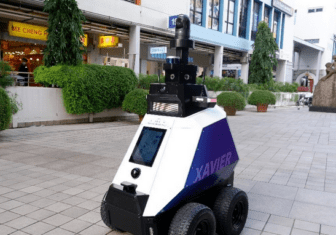 Projects like Xavier and Spot aid our public safety officers by facilitating a new form of mission-critical human-machine interaction.

While robotics and AI will play an increasingly crucial role in transforming our mission-critical communication systems, public safety organizations, technology vendors, and operators will need to adopt a unified framework to integrate such services into existing systems.

A holistic framework that merges robotics and AI with existing mission-critical broadband communication services while balancing physical risk, cyber risk, service quality, and accountability will play a strategic role in this journey.

The physical risk associated with integrating robotics and AI services into public safety systems can be mitigated by enabling rigorous field testing and experimentation. This involves evaluating each robot’s performance in high-density neighborhoods, torrential rains, power outages, high winds, and other adverse settings and conditions.

Robots’ navigation algorithms can be optimized by adjusting the quality and positioning of sensors such as light detection and ranging, ultrasonic arrays, and 3D cameras to enable responsive emergency operations.

Cyber ​​risk can be managed by ensuring that all digital infrastructure associated with robotic first responders, including the networks connecting the system’s endpoints, are fully secured. The risk posed by human operators remains perhaps the most ineffable: the ethical use of automated first-responder technology will play a key role in its adoption across the globe.

The question of trust may be thornier still. A robot can aid our first responders, but what happens when it fails to complete a task as expected? What if that failure leads to catastrophic impacts?

Who takes ownership in such scenarios?

These are the questions we will need to answer as we reset the balance of human and robotic responsibility for some of the most demanding jobs on earth.

Prathamesh Khedekar is a technical product operations manager at Creospan, where he leads technology programs for Fortune 100 clients. He previously served as a senior staff engineer at Motorola Solutions, where he designed secure mission-critical communication systems for government agencies in the US, UK, and the Netherlands.