LIKE MANY SENIOR WOMEN, Cassandra Gallagher had to take over handling the couple’s finances when her husband became ill and then passed away. Her extra challenge was that she is legally blind.

“I knew I had to handle things I had never handled before, and I’m visually blind, which makes this all the more fun,” Ms. Gallagher says.

For the past five years, the 77-year-old has relied on Joseph Lyons, who owns Twice the Geek, Half the Price in Naples. He helps her with everything from finding technology that lets her see enlarged text on her computer to fixing her printer when it goes offline. He even ordered and set up a new Xfinity box so she could watch programs like the popular Yellowstone series, making sure she knew how to use the voice-activated feature of the remote control.

“If there’s a problem I don’t know how to solve, I just call Joe. When your basic operation is that you don’t know how to do it and can’t do it, somebody has to help you believe you can overcome the difficulties. ” 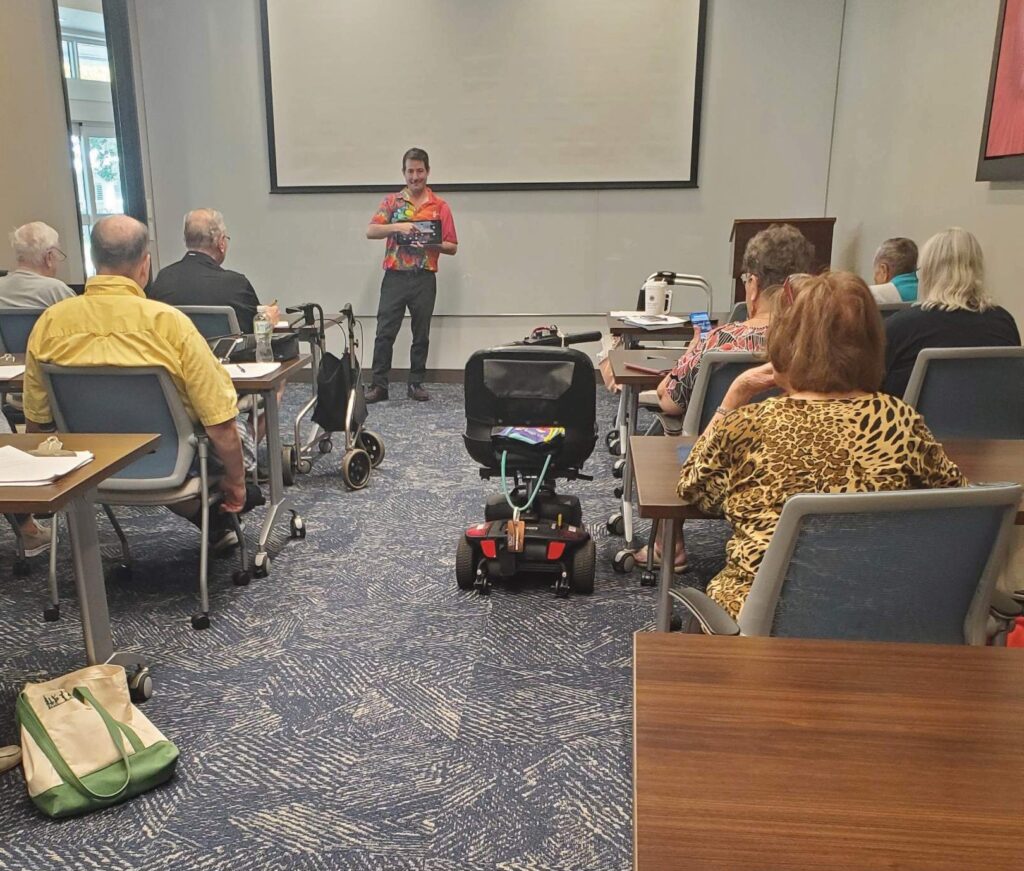 With technology so prevalent today, seniors over 65 often find it difficult to use devices they didn’t grow up with. They often don’t know where to turn for help.

“We realized that non-digital natives didn’t have the resources to be able to understand technology,” says Alex Rodas, CEO and president of GroovyTek, a personal technology training service with offices in Florida, Arizona and Colorado. “They were intimidated because they didn’t have anybody to ask. If they ask their kids or grandchildren, they get a rolling of the eyes. Or their kids fix their phone and give it back without explaining anything, so the person is still stuck. ”

Mr. Rhodes says his company’s clients are intelligent people who have a fear of appearing ignorant.

“They have accomplished a lot during their lives and seen the evolution of technology, from black-and-white TV to color to streaming, or 8-track to tape to CD to streaming. The overwhelming common denominator is that they don’t want to feel stupid but won’t use the technology if they don’t ask how to use it. ”

Classes around town offer assistance to seniors in need of understanding technology.

And even though they felt comfortable with flip phones, all the apps and functions on today’s smart phones can be intimidating to seniors.

“If you ask 10 times, we’ll explain 10 times,” Mr. Rhodes says. “We anchor the business in patience and respect.”

GroovyTek offers advice online, over the phone and in person. Founded in 2015, the company saw a booming business during the pandemic when people were isolated and technology was the only way to stay in touch with family and friends.

The pandemic spurred one Lee County nonprofit into helping seniors with this issue.

Maria Espinoza, executive director of FISH (Food programs, Island based, Social services, Helping hands) on Sanibel Island, says her organization noticed that seniors on a fixed income either couldn’t afford technology or were unable to operate the technology they had. ItsAngelFish Society donors contributed $ 20,000 to a Senior Technology Project that purchased tablets, computers, phones and training for 19 seniors. 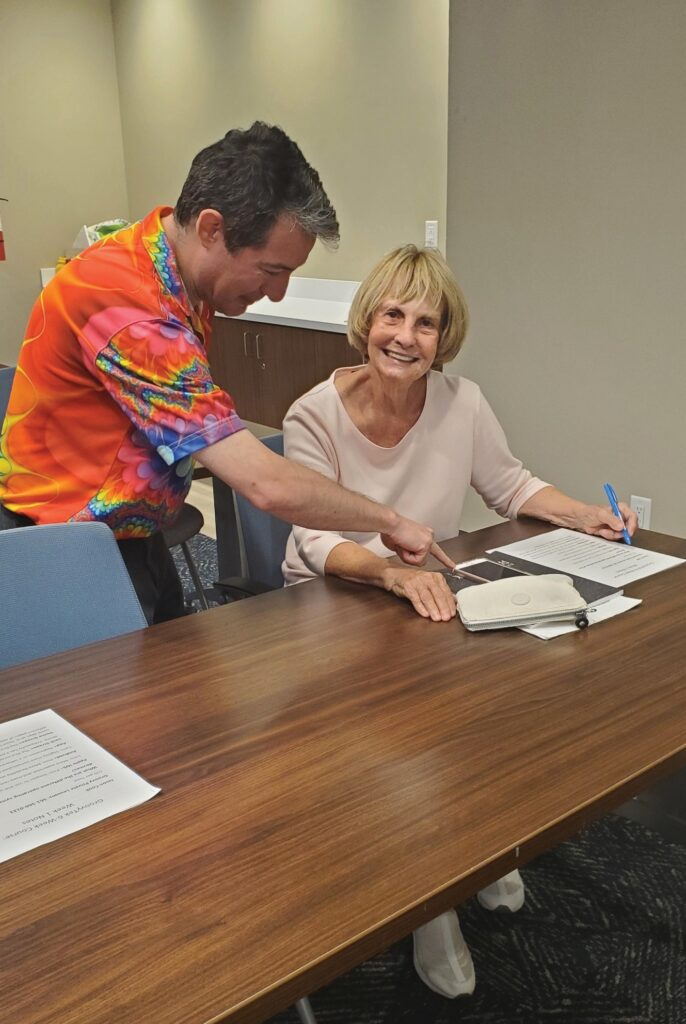 “We partnered with a few tech companies that went into people’s homes to make sure the computers and tablets were connected to WiFi,” Ms. Espinoza says. “Most people were really starting at square one.” FISH also provided manuals to help seniors understand the technology.

This assistance proved helpful not only with registering for COVID vaccines, which many seniors had to do online, but with improving their outlook.

“Most of the seniors were in their late 80s and early 90s and were homebound due to mobility, illness or self-isolation during a pandemic and their mental health took a toll,” Ms. Espinoza says. “The tablets were great because they could do Facetime and Skype and use Wi-Fi without having to pay for a new contract.”

The pandemic was also good business for Mr. Lyons at Twice the Geek, Half the Price. 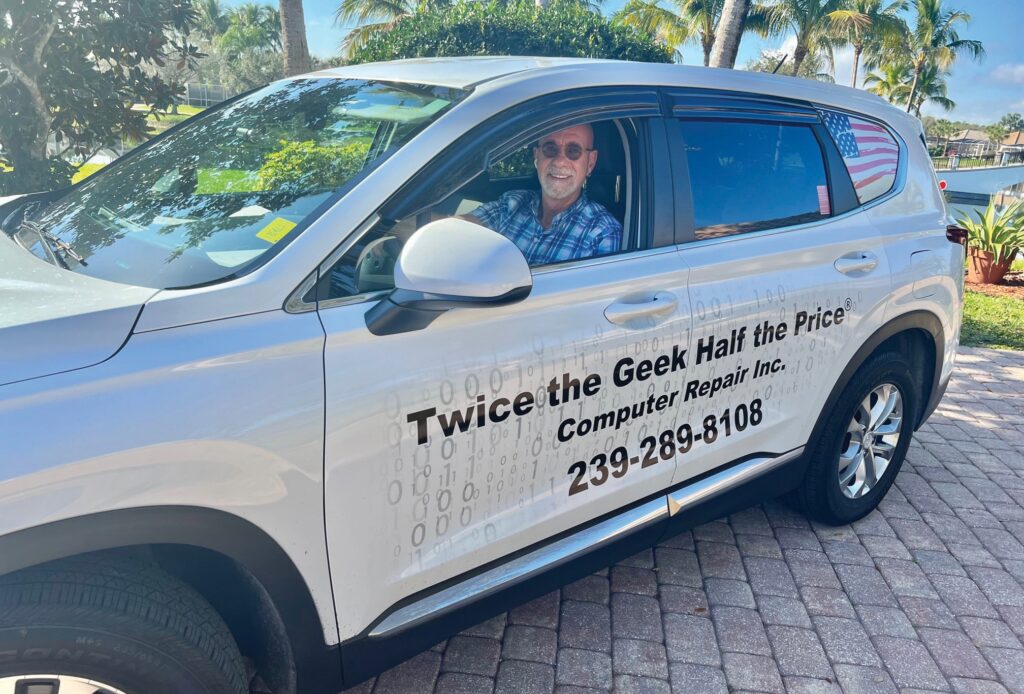 Joseph Lyons of Twice the Geek Half the Price makes a house call.

“I’ve probably added more customers over 80 in the past year than under 80,” he says.

They want smart speakers from Amazon or Google, which makes it easier for them to do things like research a question, turn on the bathroom light in the middle of the night, and play music.

For safety and health, they like the Apple watch, so they can call 911 if they fall, as well as smart thermostats and Ring doorbells.

Home entertainment technology has been popular.

“I’ve never set up so many TVs in my life,” he says. “Nobody’s going to the movies.” He recommends wireless headphones so one person can be watching television while other people in the home aren’t disturbed by the loud volumes that seniors often need.

He also helps people learn to use their smart phones.

“Ten years ago, not a lot of people 75 and older used an iPhone and now every senior has one. Understanding that and trying to get them onto Facebook is the majority of my work. ” 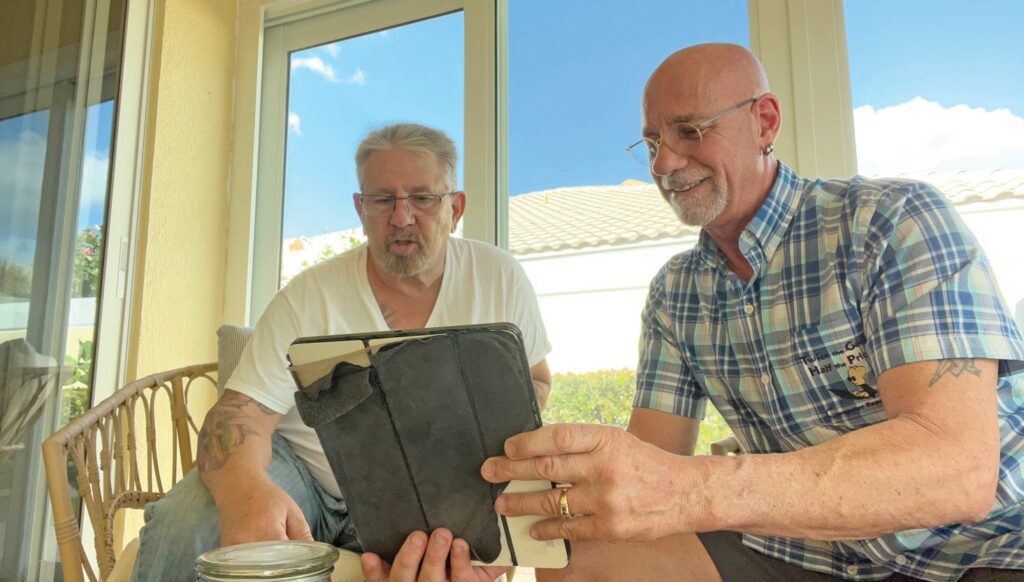 Paul Izzo, left, gets some assistance with managing contacts from Joseph Lyons of Twice the Geek, Half the Price. LAURA TICHY / FLORIDA WEEKLY

Paul Izzo asked Mr. Lyons to help when he lost all the contacts in his phone and when he had major problems getting online.

Overall, Mr. Lyons is impressed by how quickly seniors understand their devices once someone takes the time to help them.

“If you teach someone slowly, people have the ability to learn a lot more technology than they think.”

GroovyTek agrees that education is key. One part of its business model is to visit senior living facilities and offer weekly classes and weekly on-site tech help.

Jason Cook, one of the firm’s technology trainers, visits John Knox Village in Pompano Beach several times a week to teach residents to use their smart phones and tablets.

“Technology is basically a foreign language to them,” Mr. Cook says. “Most people are happy just making a phone call. But I show them Amazon Music, YouTube and all the things a phone can provide for them. ” He has demonstrated apps like Star Walk that points out constellations viewed through a phone and how his robot vacuum works.

Mr. Cook says it’s important for seniors to have hands-on learning in an environment where they feel comfortable.

Karen Sauve takes Mr. Cook’s classes and has hired him for one-on-one instruction.

“It’s such a feeling of security to know that we have somebody here on campus who can help us with all the modern technology that a lot of us are not familiar with,” the 83-year-old says. “I have learned so much.”

Ms. Sauve says she did all her

Christmas shopping on her phone and uses it to make mobile deposits to her bank and doctor’s appointments. She recently renewed her drivers’ license on the device.

“Before GroovyTek, I was in tears sometimes,” she says about her frustration with technology. “They really are giving us an unbelievable service.” ⁇

Libraries offer free help with a variety of technologies

Libraries are more than places to check out books. From online tech tutorials to tech support from librarians, they are a good resource for seniors who want to better understand their phones, tablets and other technology.

“We see a lot of seniors who have been gifted a device around holidays and don’t know how to use it,” says Hana Brown, librarian supervisor at the Port Charlotte Public Library. “All of our library staff are comfortable with devices, especially Microsoft products, printing, and how to use basic apps.”

The library system has online videos the address topics such as how to customize your desktop, scanning with your iPad, and exploring the App Store.

Many branches offer a Technology Basics program that often addresses a particular topic or allow people to bring their device and ask their own questions.

Ms. Brown says they hope to bring back the weekly “Advice for Your Device” program that provided one-on-one support weekly by appointment.

Some branches of the Lee County Library system offer programs such as 15-minute basic computer help sessions, Download Drop-In tutoring to download books and other materials to devices, and YouTube sessions to help teens start a channel.

Collier County libraries have programs to learn iPad basics, Zoom, software such as Excel, and other topics.

Residents in Palm Beach County can access LearningExpress, a self-paced online course to learn software programs, sign up for one-on-one technology assistance, and participate in-person for programs such as iMovie basics, scanning photos and documents, and Google Drive.