The Computer Emergency Response Team of Ukraine (CERT-UA) on Tuesday disclosed that it thwarted a cyberattack by Sandworm, a hacking group affiliated with Russia’s military intelligence, to sabotage the operations of an unnamed energy provider in the country.

Slovak cybersecurity firm ESET, which collaborated with CERT-UA to analyze the attack, said the attempted intrusion involved the use of ICS-capable malware and regular disk wipers, with the adversary unleashing an updated variant of the malware industry, which was first deployed in a 2016 assault on Ukraine’s power grid.

“The Sandworm attackers made an attempt to deploy the Industroyer2 malware against high-voltage electrical substations in Ukraine,” ESET explained. “In addition to Industroyer2, Sandworm used several destructive malware families including CaddyWiper, OrcShred, SoloShred, and AwfulShred.”

The victim’s power grid network is believed to have penetrated in two waves, the initial compromise occurring no later than February 2022, coinciding with the Russian invasion of Ukraine, and a follow-on infiltration in April that allowed the attackers to upload Industroyer2. 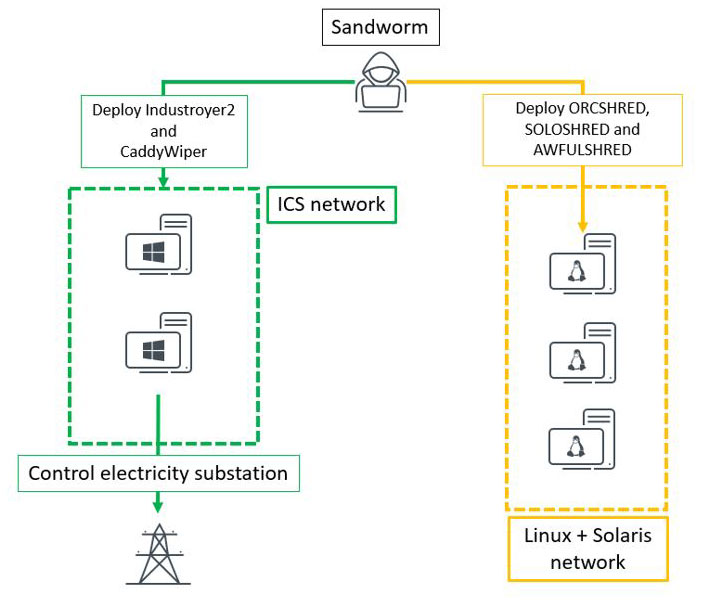 Industroyer, also known as “CrashOverride” and dubbed the “biggest threat to industrial control systems since Stuxnet,” is both modular and capable of gaining direct control of switches and circuit breakers at an electricity distribution substation.

The new version of the sophisticated and highly customizable malware, like its predecessor, leverages an industrial communication protocol called IEC-104 to commandeer industrial equipment such as protection relays that are widely used in electrical substations.

Forensic analysis of the artifacts left behind by Industroyer2 has revealed a compilation timestamp of March 23, 2022, indicating that the attack had been planned for at least two weeks. That said, it’s still unclear how the targeted power facility was initially compromised, or how the intruders moved from the IT network to the Industrial Control System (ICS) network.

ESET said the destructive actions against the company’s infrastructure were scheduled to take place on April 8, 2022, but were ultimately foiled. This was set to be followed by the execution of a data wiper called CaddyWiper 10 minutes later on the same machine to erase traces of the Industroyer2 malware.

Alongside Industroyer2 and CaddyWiper, the targeted energy provider’s network is also said to have been infected by a Linux worm called OrcShred, which was then used to spread two different wiper malware aimed at Linux and Solaris systems – AwfulShred and SoloShred – and render the machines inoperable .

The findings come close on the heels of the court-authorized takedown of Cyclops Blink, an advanced modular botnet controlled by the Sandworm threat actor, last week.

CERT-UA, for its part, has also warned of a number of spear-phishing campaigns mounted by Armageddon, another Russia-based group with ties to the Federal Security Service (FSB) that has attacked Ukrainian entities since at least 2013.

“Ukraine is once again at the center of cyberattacks targeting their critical infrastructure,” ESET said. “This new Industroyer campaign follows multiple waves of wipers that have been targeting various sectors in Ukraine.”