I have not tested a lot of Oppo phones since the initial few flagships. But the rise of the brand, especially in the budget segment, has always captured my attention. This is why I thought it is maybe a good time to check out the latest budget offering from the brand especially since it was aimed at the online market. The phone starts at Rs 14,990 for 6GB option and Rs 16,990 for 8GB option. Storage remains 128GB on both.

The Oppo K10 is a surprisingly stylish device and very unlike the plastic-finish designs we are used to seeing around this price point. The glossy camera block stands out in the matte finish rear panel and this combo gives the phone a unique visual identity. Two of the cameras at the back are larger than what you are used to and add to the style.

Interestingly, Oppo calls this the Glow design and claims the phone is scratch proof. Its IP54 rating means it is also dust and splash resistant. On the right side, the power button with the fingerprint sensor has been housed in a groove that has been carved into the frame. On the left the volume buttons hold fort. The edges across the phone are smooth and blend into the sides, thus killing sharp edges and offering a good grip.

The phone’s 6.59-inch FullHD + display has a punch hole which blends in after a few minutes of usage like an old sofa in the living room. But the 90Hz refresh rate gives this phone an edge, especially when I was trying out games like Garena FreeFire. The display is also very bright with an audio output that matches it. If you are gaming and have no earphones on, you will still get a decent immersive experience here. 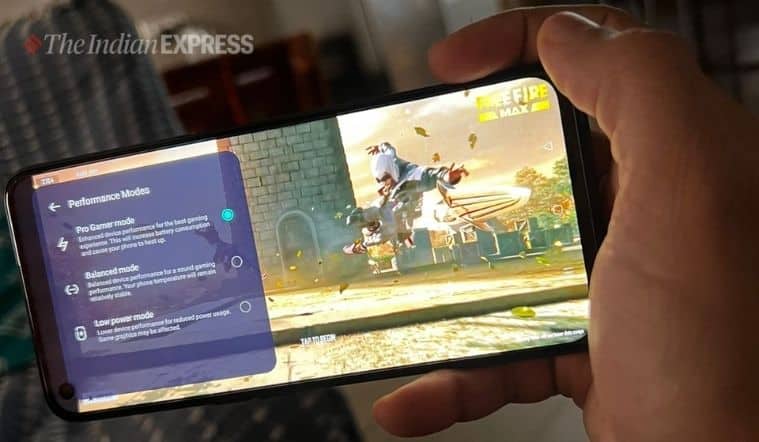 The Oppo K10 is powered by Qualcomm Snapdragon 680, which means this is a mid-range phone when it comes to performance. However, the few days I used the device, I did not feel underwhelmed at any point. Even after a longish round of FreeFire, the phone was cool, even though I had used the Pro Gamer mode. And at no point was the phone lagging behind in either response or graphics. The camera is decent, though the images do look like they have a software enhancement applied on them. (Image credit: Nandagopal Rajan / Indian Express)

The phone has a triple camera setup consisting of a 50MP main camera with 2MP bokeh and 2MP macro camera. Oppo is touting the 50MP camera of the phone as one of its best features. The camera is decent, though the images do look like they have a software enhancement applied on them. For someone like me, who loves my images to be more natural, this is a bit of a downer. However, I was impressed that the phone offers decent results even in low light. It helps that the AI ​​layer of the phone recognizes the scene and pushes the best settings for the same.

The macro mode is not the best I have used, but the Pro mode offers good control and results that can impress at times. The selfies in the 16MP front camera are good, though a bit more done up than I would prefer. But there are enough people in Oppo’s target audience who prefer this for the feature to be much sought after. One aspect of this phone that will endear it to many is its 5000 mAh battery, that too in a chassis that does not in any way give away the fact that it has a giant battery inside. In the box, the K10 comes with a giant 33W VOOC charger, which can power up this beast to full charge in about an hour. However, you will need to do this maybe once in two days given how long this battery lasts. The chassis doesn’t give away the fact that the Oppo K10 has a 5000 mAh battery. (Image credit: Nandagopal Rajan / Indian Express)

Oppo K10: What’s not that good

My biggest struggle with the phone was ColorOS, not because it is bad, but it is hard to use for those who are not used to it. It takes a second to recognize the icons and my gestures too had to adapt to what this phone uses. It might be a good idea for Oppo to offer OxygenOS too as an option for those who prefer that, might give it an edge among the younger audience.

Priced at Rs 14,990, the Oppo K10 has the potential to be a big challenger for a lot of budget phones, appealing predominantly to the young users. As you would expect with an online challenger that tries to pip its competition on specs when it comes to a comparison, the K10 is a phone that ticks all boxes for its potential users. If you don’t have flagship expectations, this budget phone will stand you in good stead.