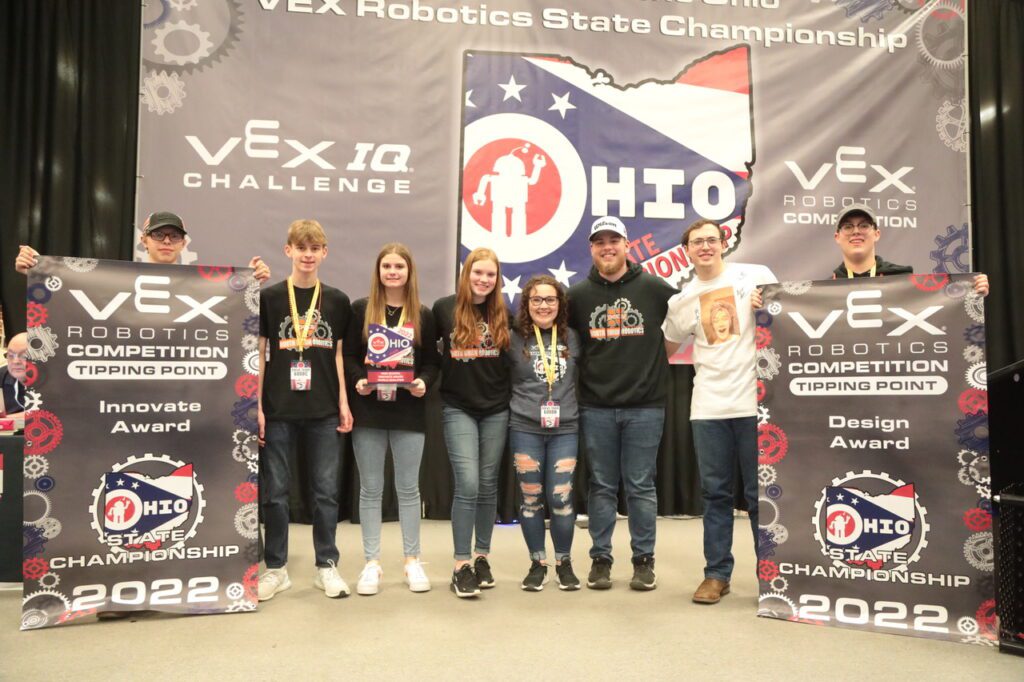 Teams played the season-long challenge game “Tipping Point,” each hoping to win an award that would qualify them for the 2022 VEX World Championship, which will be held in Dallas, TX in early May.

North Union’s presence on the award stage was frequent as teams won a variety of awards in recognition of not only their success in the competitive match arena, but also their success and high scores by judges for formal team interviews and team documentation of their engineering design process in a team notebook. Seven additional North Union middle school and high school teams won awards and qualified for the VEX World Championship, bringing the total to 12 North Union teams after a successful VEX IQ championship just over a week ago.

North Union won the Design Award in both the middle school and high school events. The Design Award is presented to a team that demonstrates an organized and professional approach to the design process, project and time management, and team organization.

The team’s Engineering Notebook and Judges interview demonstrate the team’s ability to produce a quality robot and explain their robot design and game strategy. For middle school, North Union Middle School team “Color Coded Chaos” won the Design Award. This team is made up of Brayden Campos, Evey Cobb, Preston Hoffman, and Rebecca Zimmerman. North Roll High School team “The Rolling Wheels” won the Design Award as well and is made up of seniors Owen Hall, Nathan Matlack, Mack Plotner, and Lilly Taylor.

North Union teams also won the Innovate Award in both the middle school and high school events. The Innovate Award is presented to a team with the most effective and efficient design process, and is a top contender for the Design Award. The team has an Engineering Notebook that is a clear, complete, and organized document of the design process. The team demonstrates effective management of time, talent, and materials, students understand and explain how they developed an effective game strategy and robot design, and explain how they worked together to develop their robot.

NUMS team “Dark Mode” won the Innovate Award and is made up of Lexi Golinghorst, Carter Hatings, Avery Poling, and Taylor Reeb. They also performed well in the elimination tournament and won a second award as Tournament Semi-Finalists. For high school, NUHS team “CU Later,” which consists of team members Damien Dexter, Leah Matlack, Savannah Queen, and Eric Snider, won the Innovate Award. “Infinity Force,” made up of Phillip Ardrey, Kassidy Cobb, Laela Colwell, Zach Meyer, and Felix Plouck, performed very well on the competition field and were Tournament Finalists. They finished qualifying matches ranked # 2 as one of just two undefeated teams and partnered with a team from Wooster Middle School. They advanced all the way through elimination matches to the best of three finals round. They lost the first round, came back for a win in the second round, and then lost again by a margin of just four points.

Team “All or Nothing,” made up of Adalee Bevis, Jake Hughes, Kinley Smith, and Abigail Stringer won the Excellence Award. The Excellence Award is the highest award presented in the VEX Robotics competition. This award is presented to a team that exemplifies overall excellence in building a high-quality robotics program. This team is a strong contender in numerous award categories, ranking on their Engineering Notebook, ranking for the Design Award, ranking for Qualification Matches, ranking for Robot Skills, quality of the team’s interview with the Judges, and team conduct.

Twelve North Union teams will now make preparations to compete in the VEX World Championship, to be held in Dallas, TX May 3-12 and compete with the best of the best. They will also be hosting a Pancake Breakfast and Silent Auction to raise money towards travel expenses. The event will be held at North Union High School on Saturday, March 19th from 7:00 a.m.-noon.