Microsoft has revealed plans to make cloudy Windows 11 PCs easily available from, and integrated with, its flagship OS on physical PCs, and hinted at much more integration between Redmond’s desktop operating system and its clouds.

The software giant’s plan hinges on Cloud PC, the streamed-from-Azure Windows desktops launched in 2021 as a way to consume virtual PCs without having to learn the complexities of desktop virtualization. Cloud PCs can already be accessed through an application or a browser. Now, Microsoft has promised two new ways to make them available.

One is called “Windows 365 Boot” and allows a user to boot directly into a Cloud PC from a physical PC, then choose the cloudy desktop as their “primary Windows experience”.

The other new offering is “Windows 365 Switch” and will allow switching between Cloud PC and the local desktop. A native Windows 365 app will launch the service directly from the Start menu or Task Bar. Here’s a pic of Windows Switch. 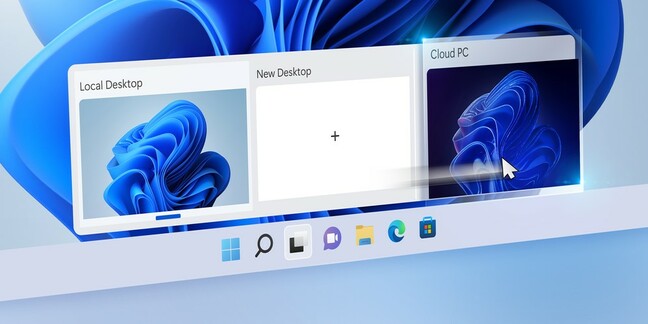 Panos Panay, Microsoft’s chief product officer for Windows + Devices, stated that the new offerings outlined above are coming “soon” to Windows 11 and will also be available from Windows 10.

Something with firmer release date is Azure AD Join support for Cloud PCs, which Panay promised will debut in May. Which seems sensible: if users are going to bounce between local and cloud PCs, having the latter manageable under AD feels like a must.

Microsoft’s also promised something called “Windows 365 Offline” that will make it possible to work with without an internet connection and synch changes made to a Cloud PC once connectivity is restored.

Microsoft suggests this is all needed to manage post-pandemic hybrid working patterns that will see many workers spend more time out offices and the well-managed environments (presumably) on offer in those locations.

But the company’s twin posts don’t address costs: Cloud PCs charge a monthly fee, so these new hybrid arrangements could be an expensive way to go hybrid.

Panay’s post states the above “are just the beginning of our Windows and Microsoft cloud integration.”

A hint of that integration can perhaps be seen in a newly announced premium endpoint management offering that can operate across PCs, devices, and the cloud. Endpoint Manager can also use a new Remote Help offering that does what it says on the can – and hopefully won’t be abused by – ahem – unauthorized tech support services that may not have the best of intentions.

The company also has more desktop goodies on the way, confirming the impending arrival of familiar functions to Windows Insiders: folders in the Start Menu, snap layouts and tabs in File Explorer to name but three. The company also talked up targeted organization messages in Windows 11.

No – not ads (not yet anyway) but a way for an IT department to send messages to users over the various surfaces in Windows 11 (for example, the taskbar or lock screen.)

Endpoint Manager has also had a few tweaks as Microsoft ponders a hybrid workforce, with Windows Autopatch (due in July 2022) inbound.

The service (a feature of Windows Enterprise E3) creates four deployment rings, dubbed Test, First, Fast and Broad. The number of devices within each ranges from the bare minimum for Test to a majority in Broad, and is aimed at getting updates delivered in a timely fashion without requiring administrators to devote time to planning rollouts.

Although some of Microsoft’s announcement today focus on the near future, the direction of travel is clear. Redmond has realized that the hybrid model is very much here to stay and intends for its Cloud PCs to meet customers wherever they might be.

To back up this viewpoint, Microsoft’s Work Trend Index found that 52 percent of the 31,102 full-time employed or self-employed workers it surveyed across 31 markets in January and February this year are likely to consider hybrid or remote work in the year ahead. And for those already working at home or in a mix of environments, 80 percent reckon they are just as, if not more productive since lockdowns. ®