The first thing that comes to mind when someone talks about a gaming laptop is performance, loud fans, RGB lighting and a bulky design. While most gaming laptops juggle between these four aspects, the new Lenovo Legion Slim 7, as the name suggests, aims to eliminate the bulk.

The Legion Slim comes with a skinny, portable profile while being lightweight and aims to pack specs powerful enough to still be a good gaming machine. Does it succeed? Read on to find out.

The Legion Slim 7 features a well-built aluminum chassis and is built like a tank. There is a good balance of RGB and minimalism here, something that you really need to experience in person to understand how versatile this look is in terms of fitting into everything including a gaming room, an office room or a cafe.

The lid however, can pick up a lot of fingerprints and smudges so be prepared to clean it. The hinge is really smooth and has a really satisfying feel to it when opening the laptop, something that you can do with a single finger.

The lid on the Legion Slim 7 is a big-time fingerprint magnet. (Image Source: The Indian Express / Chetan Nayak)

The lid also opens 180-degrees which is great for certain use cases. There is also this color-shifting finish on some parts like the area above the hinge and the Lenovo Legion branding that also add a unique touch to the machine. Two more things I liked are the webcam shield and the built-in microphones.

Above all is the portability. At less than an inch thick and under 2kgs in weight, the Legion Slim 7 is easy to put in a bag and forget when traveling, which is a huge plus for a gaming laptop.

The 15.6 FHD display panel has a wide enough color gamut and 165Hz refresh rate, making this a fast enough screen for competitive fps gaming. There is G-Sync support as well for a tear-free gaming experience. However, one thing that could have been better here are the viewing angles, which aren’t really the best.

The Ryzen 7 5800H is a powerful chip and the laptop really makes the most of it, which is great considering this is one of the slimmest 15-inch laptops out there.

Even though it isn’t pushing out the most frames per second in the segment, the Lenovo Legion Slim 7’s performance is largely on par with competitors. I managed to get about 120-140fps on Shadow of the Tomb Raider, 150 to 160 fps on FIFA 22 and 120 to 150 fps on PUBG: Battlegrounds. Performance on the Lenovo Legion Slim 7 is good and the laptop can play all modern AAA games comfortably. (Image Source: The Indian Express / Chetan Nayak)

You can use the Lenovo Vantage software to tune the performance of the laptop to your liking. You can also turn on or off the hybrid mode that switches between the integrated and discrete GPU modes.

The 71Wh battery life isn’t the best in the segment but gets the job done. Considering that you’ll be plugged in while enjoying AAA games, don’t expect a lot once the laptop isn’t plugged in. That said, you can get about 7-8 hours of light usage when you’re not gaming.

The laptop comes with a nice full-size keyboard that somehow manages to not make the keys feel small. This is coupled with neat sections including a dedicated one for the full-size arrow keys. The key travel is not the best but it isn’t bad either. 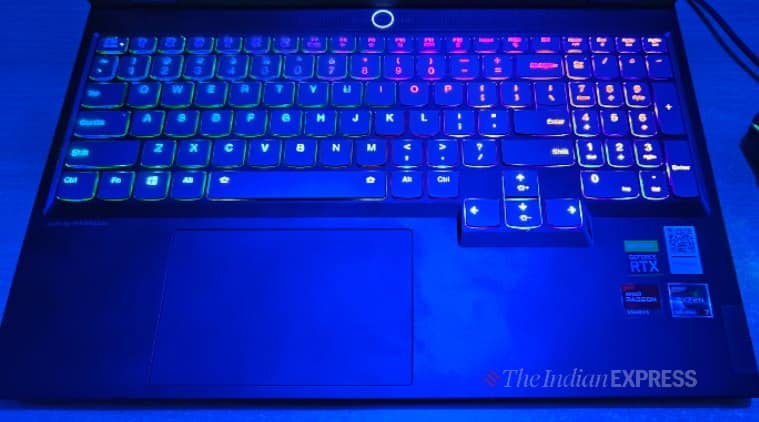 The keyboard and trackpad are great, but keys can get hot quickly on longer gaming sessions. (Image Source: The Indian Express / Chetan Nayak)

You get per-key RGB lighting now which is really easy to control with the onboard customization software, but there are also Lenovo’s quick shortcuts that allow you to switch between lighting modes, keyboard brightness and a few more settings using the Fn key together with some other keys. This is made easy to use as when you hold the Fn key, only keys that support a quick shortcut light up.

There’s also a large trackpad here that gets the job done just fine. Although for most games, you may be using third-party mice and other accessories.

Some major ports are missing here, one of the downsides of making a slim laptop. This leaves you with two USB-3.2 Type-C Gen 2 ports on the right, two USB-3.2 Type-A ports on the back and an audio port and SD card reader on the left, which could make life easier if you use this machine for content creation.

You don’t get extra USB-A ports and even more importantly, an HDMI port and an RJ45 are missing, which could be important for some gamers out there. The port selection isn’t bad but it may be inappropriate for some people. That said, the distribution of the available ports is nice. The laptop has adequate ports but misses out on a dedicated RJ45 and HDMI port. (Image Source: The Indian Express / Chetan Nayak)

The Lenovo Legion Slim 7 can get very hot especially around the middle of the keyboard while gaming. While gaming laptops are known to heat up with AAA titles, pressing certain keys on the keyboard here was more than uncomfortable during a long session of Shadow of the Tomb Raider.

Verdict: Should you get the Lenovo Legion Slim 7?

The Lenovo Legion Slim 7 isn’t meant to be the most powerful gaming laptop, but a capable one that you can carry around without it feeling out of place. That comes thanks to its slim form that brings compromises like average battery life, lesser ports and some heating. If that extra portability is not an important factor to you, you may want to look at other options.

However, if the portability does sound nice, the Legion Slim 7 is great at what it does and when you plug it in for the full gaming experience, it won’t disappoint most. It also makes for a good content creation machine thanks to the portable form, dedicated graphics and SD card reader.