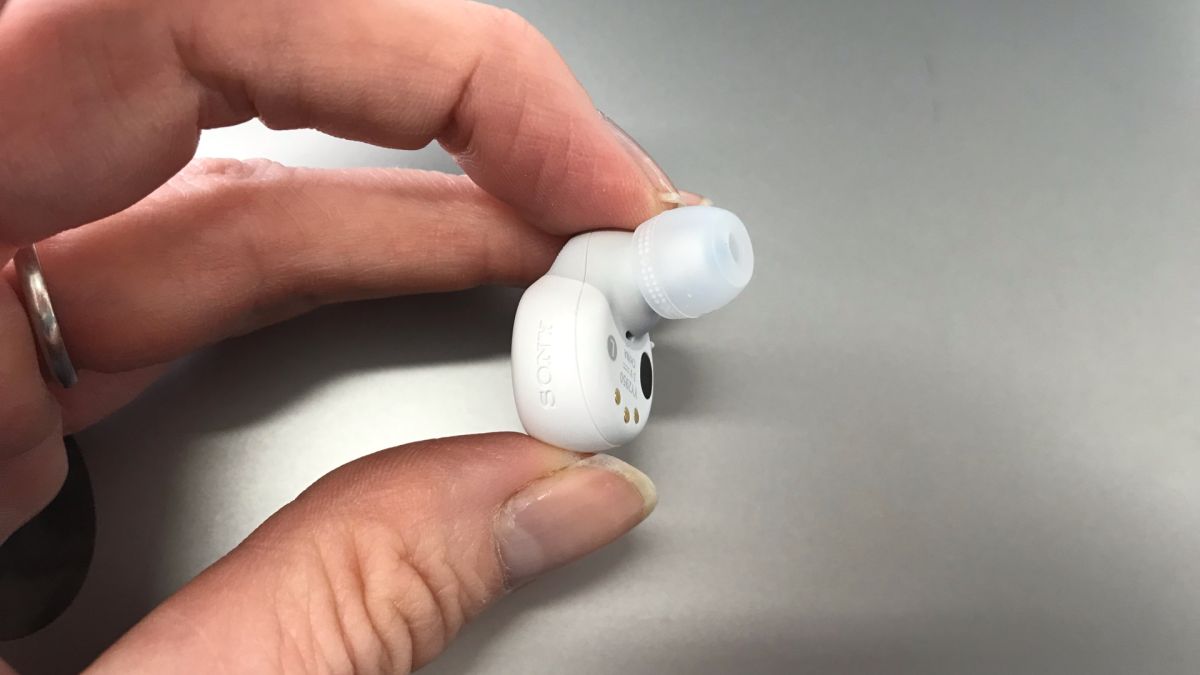 It’s a familiar story: sprinting for the 8:01am train, music pumping, then bam, a split-second of terror and ping – one of the true wireless earbuds I’m supposed to be testing has just hit the pavement. Luckily, it didn’t fall into a drain or puddle… not this time.

It isn’t for want of trying. The night before testing a fresh set of in-ear headphones, I always hold a rehearsal. First, I dutifully remove the medium eartips all true wireless earbuds come fitted with and replace them with the smallest option provided.

This isn’t something you want to do in a rush; it can be fiddly. Then, I push the buds into my ear as far as the pain barrier allows.

Next (as most manufacturers specify), I twist to lock them into place as best I can, with a silent prayer and a little turn of my head from side to side.

Finally, I remove them from my ears and leave them to run-in overnight, thus allowing the components to ‘bed-in’ and letting those tiny drivers become accustomed to doing their job, before any proper analyzing of the sound can begin.

As I drift off to sleep, I hope that maybe this time the design, although still a little large for me, has benefitted from supreme ergonomic refinement, or a lighter build, or is at least weighted differently to hug rather than repel the orifices they are designed for. Maybe this time I’ll be lucky. Maybe this time I’ll win, when I run for that train tomorrow.

Having tested dozens of true wireless earbuds for over three years now, I have found that a good 60% of models on the market today do not fit my smaller ears comfortably or securely. And by small, I mean that my ear canal is too narrow to accommodate most medium-sized eartips (and even some small ones) and that my outer ear is also on the bijou side.

Want to get technical? My concha, antitragus and tragus are just a bit close together for most designs. Said designs can often look quite delightful in the palm of my hand, like little jewels of sonic deliverance, but they simply want to break free as soon as I place them into my ears to hear music.

So it was with some trepidation that I unboxed a set of new earbuds from Sony, a company I have historically found to be one of the chief offenders in terms of earbud size. (See the Sony WF-XB700 for reference – 8g per earbud. Solid budget-friendly sound, but check out the size of them.)

The new driver housings in the Sony LinkBuds S don’t actually look that small, either. And, when you open the box, there’s that old three-step instructional graphic that always makes me sigh. Twisting the buds into place is step two – aka the last thing you must do before actual music can be enjoyed.

As I held one earpiece betwixt thumb and index finger, however, the build really did feel feather-light. The neck of the earbud (the bit that you send into your ear canal) also felt nice and narrow and to my surprise, I found a super-small set of eartips bundled in alongside the usual small and large options. It’s as if the makers had heard my silent prayer.

After a bit of research, the inkling was confirmed – my wishes have certainly not fallen on deaf (if likely medium-sized) ears. The engineers have been working very hard on distilling drivers and noise-cancelling tech into a smaller, lighter package. And I am grateful, Sony.

You see, the LinkBuds S feature the same custom V1 sound and noise-cancelling processor as Sony’s top-tier WF-1000XM4 proposition, but they are monumentally smaller than the XM4, weighing just 4.8g / 0.17 oz per bud.

One of the few designs my ears never seem to struggle with is Apple’s ‘toothbrush head’ AirPods design; although the sound is far from audiophile-grade, the fit is friendly.

Apple’s flagship AirPods Pro weigh 5.4g / 0.19 oz per bud, and that tried-and-tested design (carried over from its once-free EarPods, of course) means that the weight doesn’t feel like the earbud is poking right out of your ear, trying to work itself to the floor, but instead feels as if it wants to make good friends with your cheek for the day.

OK, 0.6g lighter per earbud (the difference between the Sony LinkBuds S and the Apple AirPods Pro) is hardly huge, but I’ll take every decigram I can get and thank you for it, if it eases the strain on my poor little lugholes.

When you factor in the shallow design of the LinkBuds S, each lighter earbud’s weight is well distributed and the spherical units sit flush, practically hugging the part of your ear I now know is called the external auditory meatus.

Are you ready for your close-up?

Part of Sony’s setup for its proprietary and immersive 360 ​​Reality Audio involves taking a photo of each of your ears without wearing the earbuds. I have often felt that this is mocking me, because although it recognizes my face just fine, it takes several goes to get it to acknowledge the existence of my ears.

Even then I have to scale down Sony’s special ear-stencil, which you drag and place over your ear so that the earbuds and Sony Headphones app can do their special optimization mapping.

While all of these shenanigans still played out (I ended up having to take said photos manually), the fact that I already knew these small earbuds fit my ears well gave me the confidence to carry on – and when you are able to achieve a good seal between earphone and ear, the sound quality will also be far better.

With Sony’s LinkBuds S, 360 Reality Audio works like a charm for me – never have I heard it as meaty, as impactful, as directional and, frankly, as alarming as through these fantastic little earbuds.

Of course, this isn’t a full-fat review (although look out for that soon) and I cannot vouch for those of us with larger ears. But if, like me, you have struggled on account of your smaller listening gear since the advent of true wireless earbuds, I would add the Sony LinkBuds S – not to be confused with the also-new Sony LinkBuds – to your list.