WASHINGTON: The US Army’s I Corps is testing a new distributed mission command concept that could fundamentally change how the Army Corps functions across the vast distances of the Indo-Pacific.

Instead of the I Corps maintaining a single headquarters with several hundred staff shuffling around, the service is looking at breaking down the traditional headquarters infrastructure into “functional nodes” that would be distributed across the region but can remain in constant communication, Brig. Gen. Patrick Ellis, Chief of Staff, told Breaking Defense in a recent interview.

“If we’re running the Corps and performing our command and control functions from six, three, five, six locations as opposed to just one, we’re much more resilient, and honestly much more survivable, in the event that we’re ever targeted, ”said Ellis. “The existing Corps structure – the kind of doctrinal, the way the Corps are built – didn’t necessarily make the most sense for us.”

The Corps – and Army formations from large to small – want to move away from static command posts or headquarters marked by tents, trucks and generators, and fight in a “distributed” manner, meaning that a Corps can coordinate the battlefield using assets that are hundreds, if not thousands, of miles apart.

In a recent experiment in Guam using four Strykers loaded with advanced communication capabilities, the I Corps worked to prove that it can pass important battlefield data, including fires and targeting information, between platforms, even while they are in transit in the air or on a boat. For example, Ellis was able to send mission command information from a Stryker, in mid-air transit aboard a C-17 headed to Guam, back to Lewis-McChord Joint Base using the airplane’s antenna. Additionally, the Stryker element succeeded in sending information while plugged into the Navy’s USNS City of Bismarck network, a military sealift ship, though it remained portside. 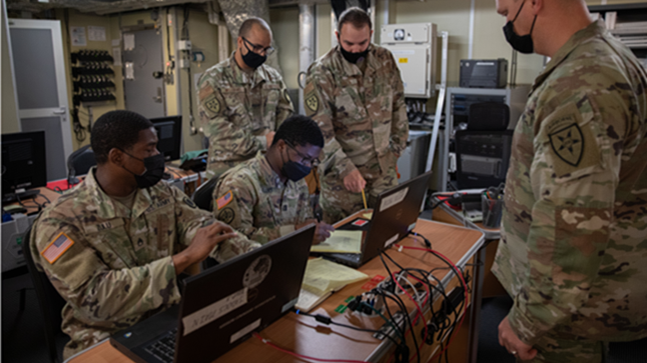 US Army Soldiers assigned to America’s First Corps and service members assigned to Joint Communications Support Element establish communications onboard the US Naval Ship City of Bismarck, Feb. 16, 2022, as part of a joint training operation to experiment and exercise distributed mission command in the Indo-Pacific. (Army / Jailene Bautista,)

“Instead of losing situational awareness, like we do now either in flight or in transit when your stuff’s on a vessel, we figured out that if we could use the transport that’s on these vessels and perform mission command functions and stay situationally aware as we ‘ re transiting from one location to another, ”he said.

It’s worth reiterating what happened here: from the back of the C-17, the Army conducted a video teleconference. While that may not sound impressive given the last two years of remote work, it’s an important feat given the high bandwidth requirements to support live video – particularly on a military aircraft in the air. Ellis said that’s not a function the Corps would always use, but it proved that “we could move large amounts of data.”

Second, and perhaps a more germane function for the Corps, is that it was able to pass targeting data from the Army’s Field Artillery Tactical Data System from the aircraft to the ground.

“It’s a useful capability for us because it allows us to provide in-flight updates from mission commander back down to launchers,” Ellis said. “Or in the event that we flipped it and we put some of our HIMARS launchers aboard the aircraft and we can actually update their targeting data from the ground while they’re on the road.”

The Corps’ experiment will also help feed into Joint All-Domain Command and Control, the Pentagon’s future warfighting construct in which sensors and shooters across the battlespace are connected to provide up-to-date information.

Central to the whole concept is cloud computing at the edge. Using the cloud, soldiers at different nodes can access the data they need to accomplish their mission and operate more efficiently. However, soldiers will need to bring forward some network hardware to have some immediate access to data in an environment where they were disconnected from the hyper-scale cloud hub thousands of miles away.

But the challenge that the Corps has to consider is how much data and what types of mission command data are vital for soldiers to bring forward with them, versus how much can remain in the main cloud hub. The I Corps is working through what information exchanges “absolutely have to occur,” Casely said.

For example, Ellis said its Corps-level fires personnel are being asked questions about how much data they need to do their job – do they need all of their targeting data or just imagery, and how long before a mission? That’s a question similar to one from Project Convergence, where the Army grappled with what data has to be sent, and in what format, while not eating up the limited bandwidth in a conflict zone.

“It really, really challenges not just the folks in the G6, but the entire staff and the entire staff process to think about what information needs to be exchanged, in order for them to perform their mission,” Casely said.

Another challenge is deconflicting updates in the cloud system, Ellis said. If one group of soldiers come out of the disconnected environment and update the broader cloud, while someone else is updating the same type of information in the larger cloud, how do the soldiers sort out whose data is the most relevant?

“We’re in the very nascent stages of determining how some of the cloud computing works to support this manner of fighting,” Casely said. “But I’m feeling really, really good about where we’re headed.”