The last few years have been one heck of a roller coaster ride. The pandemic and the recent war between Ukraine and Russia bracket the events for now, but suddenly a lot of companies are aggressively rethinking global resourcing and divesting manufacturing as bad ideas.

The result is some interesting dynamics which should lead to higher prices than before but lower than we have now, coupled with a far stronger supply chain.

Let’s talk about some of the changes going on in the background, and we’ll close with my product of the week, which is a huge improvement to one of my favorite products, ChiliPAD.

The move away from internal combustion engines (ICE) was progressing slowly with an expectation we would cross over into most electric cars sometime between 2030 and 2035. But the volume increases post-pandemic, coupled with the Russian war with Ukraine, has pushed up gas prices significantly.

Owners of electric cars are now all over social media talking about how smart they were to have made the change (and, before you ask, yes, I am one of those folks because it is fun to drive by an expensive gas station honking, waving , and smiling).

High gas prices on an existing product often drive people to make changes earlier than otherwise anticipated and, it appears that, thanks to these extremely high gas prices which are only likely to increase, far more people are thinking about going electric.

Sadly, electric cars are increasingly backordered, with companies like Rivian and GM talking long wait times before you can buy or even put a deposit down on some of these vehicles. If electric car companies can improve their manufacturing capacity, they are likely to make a large profit. However, running against this are the supply chain problems that are getting worse for some.

One of the big problems in Ukraine and other countries that have bought Russian weapons is getting help and parts when Russia is engaged in conflict. Not only would they have to overcome sanctions, if Russia attacks them, there is no doubt that they will be at a disadvantage – even if those weapons do not have some secret vulnerability that only Russia can exploit.

As a result, I expect the demand for Russian weapons will drop off a cliff going forward, particularly with the old parts of the USSR that are now concerned they may have to protect their independence from Russia.

Russia produces titanium, which is critical for aircraft, and has a near monopoly on production of this very hard, light metal. Ukraine builds a lot of ASICs used in things like printers and IoT devices. Both items have suddenly become very hard to acquire.

This is forcing buyers to look at alternative suppliers for the things they typically get from both Russia and Ukraine and, even if the war ended tomorrow, it is unlikely that Russia’s sanctions will be lifted, or that Ukraine would be able to rebuild its infrastructure quickly. enough to hold the market.

Companies like Intel are looking at bringing manufacturing capacity back into the US at scale and shifting sources from countries that are, or are likely to become, embroiled in conflict or bad government decisions, or are just physically remote, to more localized and reliable sources.

A lot of countries are suddenly at risk of being embroiled in conflict and that is forcing increasing investment considerations and partnerships to avoid existing and potential future supply chain issues. The US and EU should be the biggest beneficiaries of these changes.

Taiwan, which has been on the back burner about logistics issues, recently suddenly jumped to the front burner thanks to the Ukraine / Russia war as companies and governments start thinking what happened to Ukraine could happen there.

Every aspect of Taiwan’s protection is being revisited because so many are dependent on the manufacturing there that it has suddenly become far more critical to ensure China leaves Taiwan alone than it was. South Korea could also be impacted by that conflict or difficulties with North Korea, raising concerns about that country as well.

While the only thing that is certain is that many of the existing relationships will change, both Taiwan and South Korea should enjoy a significant increase in support for their independence and protection going forward.

One of the surprises of Ukraine / Russia conflict is how well drones and man-carried weapons are doing to combat Russia’s air and ground superiority. There appears to be a lot more interest in weapons systems that are easy to deploy, easy to learn and easy to fire.

Billion-dollar aircraft are useless if you can’t get them to the battlefield, and much of the United States’ advanced and very expensive weaponry is sitting this war out. Unused or unusable weapons systems are just a wasted expense.

I anticipate some major advancements to highly portable, man-carried weapons systems as we veer away from expensive platforms that are difficult to learn and deploy as a result. Much like battleships became obsolete after WWII, I expect there is a good chance that tanks, and several military aircraft types will be retired after this war in favor of far more portable, high-powered systems.

If there was ever a time when we needed the old BlackBerry communications network, this would be it. But sadly, it is gone and, again, its loss is being deeply felt.

Starlink has stepped up to provide coverage, but it is not very portable and cannot really address the needs of either the Ukraine military or its volunteer forces, and Elon Musk has warned it may not be secure enough for the task.

However, it is helping to solve the problem by suggesting a follow-on technology that is also space-based, but more secure, could become very popular in areas that are ripe for war; and, right now, everyone is concerned with war.

In addition, there is a clear need to re-establish mesh network technology so that volunteers and first responders can remain effective even after major communications systems have been destroyed. To both coordinate responses to the invasion and help citizens safely evacuate areas under attack, a mesh system could provide what BlackBerry once did and help keep both groups safe and informed.

Before the first World War, planes were a joke. But by the end of World War II, we had jets and advancements in a variety of technologies, including nuclear power and rockets, that continued to advance rapidly for decades.

Wars drive change, and this war is doing the same when it comes to what and where we manufacture the tools of war. Moves to electric vehicles and radical new weapons are likely to come out of this conflict with a focus on weapons that are carried by people, easy to learn, or are remotely or autonomously controlled.

The full impact of these changes may not be known for years but, one thing is for sure, they will be significant.

I have been using a ChiliPAD or Chilisleep’s higher-end product, the Ooler, for over a decade and it is the one product without which I really can’t live. As I have gotten older, sleep has become more difficult to get enough of, and being too hot or cold was often the problem.

The ChiliPAD did use technology like what they use to cool astronauts and race car drivers to cool or heat your bed. It uses distilled water (regular water will cause problems with the unit over time), so you don’t have to deal with electrical fields that some believe are unhealthy. Also, unlike an electric blanket or heating pad, Chilisleep products both heat and cool.

The initial ChiliPAD was nice, but it heated better than it cooled, did not hold a lot of water (so you had to refill it often) and the pad itself was not very comfortable.

This got better with the Ooler which held more water, cooled better and used a phone app for control and to set sleep cycles, better automating the tool. The pad itself was also improved, but some still complained that the piping in the pad for the water was uncomfortable. It never bothered me, but it did tend to slip off the mattress when making the bed. The water reservoir was hard to open, and you really couldn’t tell how much water was in the unit without taking the cap off and looking into the reservoir. 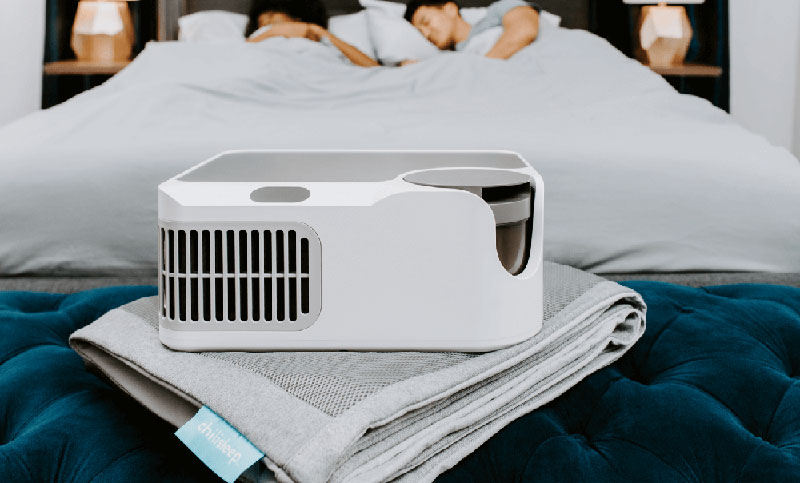 Not only did they get rid of the piping in the pad so it is much more comfortable, but the pad also now attaches all around the mattress so it no longer slips off, and the control units have large, removable water reservoirs that are a ton easier to fill, and you can see the water level without opening the top.

Plus, it comes with a new phone app that promises to do a better job of monitoring the temperature and giving you better automated choices while you sleep.

The opinions expressed in this article are those of the author and do not necessarily reflect the views of ECT News Network.