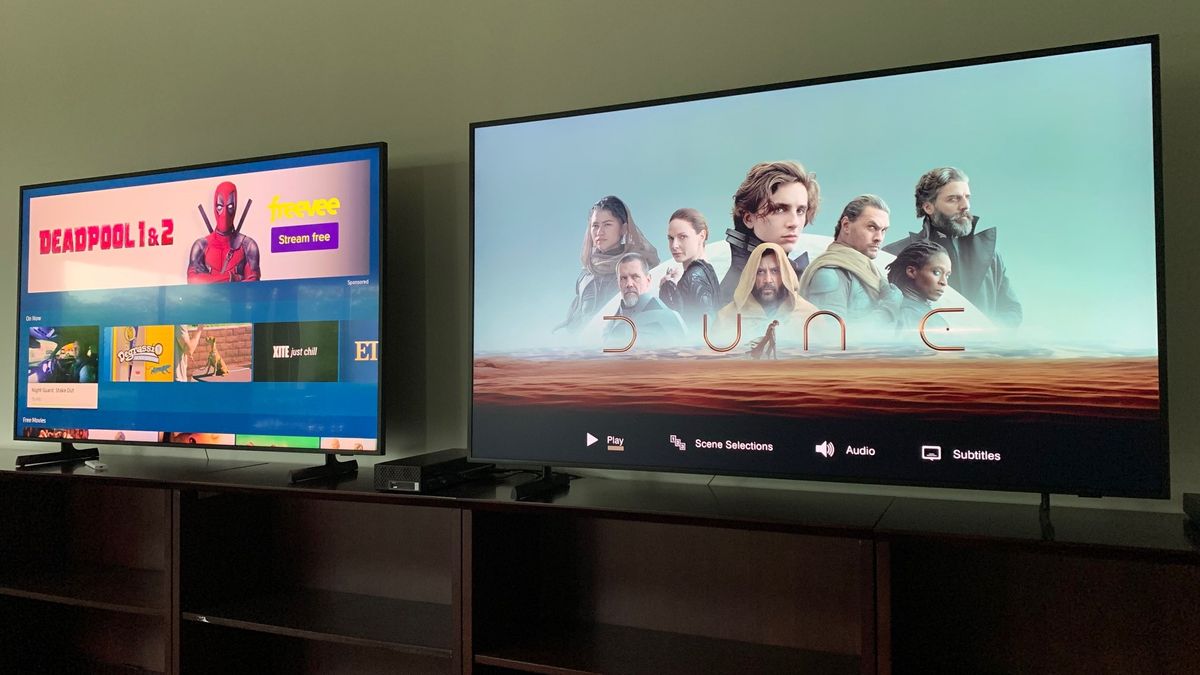 Samsung’s The Frame QLED 4K TVs are the flagship models in the company’s Lifestyle lineup. And while that “Lifestyle” tag might imply a lower level of performance, The Frame TVs feature the same Quantum Dot technology responsible for bringing a rich, expanded color range to Samsung’s more premium sets.

New for 2022, an anti-reflection screen coating has been added to enhance viewers’ enjoyment of displayed artwork and photos when the TV is in Art mode – a key feature designed to coax decor-minded viewers to choose The Frame over the company’s other TVs .

We had an opportunity to visit Samsung’s facility in Northern New Jersey for a full-day hands-on experience with The Frame and several of the company’s other 2022 TVs, including the new S95B QD-OLED model. As part of the testing arrangement, Samsung also provided its 2021 The Frame with the same 65-inch screen size so we could do a side-by-side evaluation of both sets.

Is Samsung’s 2022 The Frame the Lifestyle TV to beat? From our initial hands-on test, the verdict would appear to be yes.

The 65-inch The Frame we got to spend quality time with is part of Samsung’s 2022 TV lineup. Aimed at viewers who’d prefer to be looking at artwork or family photos on their wall as opposed to a large, black rectangle when the set is not in use, The Frame is sold in a wide range of screen sizes – from 32 inches all the way up to 85 inches. Suggested retail prices for the new TVs are basically the same as last year’s lineup, something that comes as good news in this era of otherwise skyrocketing inflation.

Current prices for the 2022 The Frame TVs are listed below. All models are available now.

The Frame TVs come with a basic stand for tabletop installation, although most viewers are likely to hang them flush against the wall as Samsung intended using the included slim-fit wall mount. A thin black bezel surrounds the screen, but to get the full TV-as-artwork effect, you should opt for one of the company’s customizable frames, which are available at extra cost in seven colors with a modern or beveled design.

As mentioned above, Art mode is a key feature of The Frame TVs. This lets you display either personal photos, a selection of pre-loaded still images or one of 1,400 and counting digital artworks that are available for download from Samsung’s Art Store (a $4.99/month subscription). The TV’s Matte Display Film finish is highly effective at filtering out light to eliminate onscreen glare (see photo above), with the end result that photos and artwork show a much higher degree of detail (the texture of brushstrokes in oil paintings, for instance) . And while one might think having your TV powered on 24/7 to display art is a less than eco-friendly idea, an intelligent motion sensor that gets triggered automatically in Art Mode switches the TV on when it detects your presence in the room, and switches it off when you leave.

Beyond Art Mode, The Frame TVs are all LCD models with edge-lit LED backlighting, and they use Quantum Dots to achieve “100% color volume,” according to Samsung. Measurements we made on-site confirmed 99.7% coverage of the Rec. 709 (HDTV) color gamut, with DCI-P3 (the gamut used for digital cinema and Ultra Blu-ray disc releases) coverage at 92%. Not bad for a Lifestyle TV!

While we didn’t have an opportunity to thoroughly dig in with the company’s Tizen Smart TV interface, it has a fairly busy look, although a mid-screen horizontal app strip can be populated with favorites for easy browsing using Samsung’s remote control. About that: Samsung has made great strides in simplifying its remote controls to make them more user-friendly for the average viewer. But the downside here is that someone looking to make regular picture adjustments – a TV reviewer, for example – needs to dig 10 button-presses deep through the set’s menu system to make even minor brightness or contrast tweaks.

When viewing a full-screen 100% white test pattern on The Frame, it showed no sign of color tinting or brightness drops from the center to the edges of the screen, but rather a brilliant and fully uniform white. This bodes well for displaying artwork and photos, which, of course, will also benefit greatly from the matte finish screen coating when viewing with overhead room lights on and window blinds opened. While images looked stunning when viewed straight on, we also noted that brightness uniformity was noticeably lessened when viewing anywhere beyond +/- 15 degrees off from center – a traditional weakness of LCD display tech.

Other measurements showed Filmmaker to be the most accurate picture mode when it came to color reproduction. Maximum picture brightness (as measured on a 10% white window) in that same mode was 307 nits, while Dynamic mode pushed it to 570 nits. To put those numbers in context, you can expect about the same maximum brightness levels from an average OLED TV, while the best LED-backlit LCD sets can hit upwards of 2,000 nits.

A final measurement note – this one aimed at gamers: Input lag on our The Frame sample measured a respectable 11.8ms (milliseconds) with a 4K test signal generator, and 13.2ms with a 1080p source. (We did not have time for gaming during our session, though it should be further noted that a 4K/120Hz video input is supported by the set’s HDMI 4 port.)

Given its relatively modest light output (by LCD standards), it was clear The Frame would look best with movies when the overhead lights were switched off and blinds drawn, so we proceeded to watch a few reference 4K Blu-discs in a dim-room environment. Opening scenes from the most recent James Bond film No Time to Die that took place in sunny Italy had an overall crisp and clean look. Colors were suitably vivid, skintones natural and white highlights showed a good level of fine detail. But compared to the other, brighter Samsung sets we had at our disposal at the company’s facility for comparison (a QN90B 4K QLED and the S95B QD-OLED among them), The Frame lacked that last level of visual punch that higher-brightness TVs deliver with HDR sources.

More troubling with movies was The Frame’s handling of dark scenes. Even in Filmmaker mode, there was a noticeable lack of detail in shadows. This was evident when watching relatively dark titles like dune (2021), especially in scenes like the one where Paul Atreides is tested by the Bene Gesserit Reverend Mother. Instead of revealing details in the shadowy background, we saw a uniform sheet of black. Same thing when watching The Batman: detail in the film’s many dark scenes was often obscured, although the occasional flashes of color looked satisfyingly vivid.

The sound quality from The Frame’s 40-watt, 2.0-channel built-in audio system was passably good, although I didn’t stress it much during use. While dialogue was clear, connecting to an external soundbar would have undoubtedly enhanced performance. (The Frame TVs come with Samsung’s Q-Symphony feature, which allows for one of the company’s soundbars and the set’s speakers to play in unison.) A Bluetooth wireless output provides another TV audio support option.

Our initial hands-on test showed The Frame to be a good overall set for everyday TV watching, and a particularly impressive one for viewing artwork and photos – Samsung’s prime design directive for this category in its Lifestyle lineup. Add one of the company’s optional “frames,” hang it on the wall, and load up an old master and this TV will seem almost indistinguishable from an actual painting.