Ever wonder what it would be like to use the world’s fastest supercomputer? Well, with these plans by computing giant Fujitsu, maybe you don’t have to imagine.

(Photo: STR / JIJI PRESS / AFP via Getty Images)
TOPSHOT – This picture taken on June 16, 2020 shows Japan’s Fugaku supercomputer at the Riken Center for Computational Science in Kobe, Hyogo prefecture. – The Fugaku supercomputer, built with government backing and used in the fight against the COVID-19 coronavirus, is now ranked as the world’s fastest, its developers announced on June 22, 2020.

By using the power of cloud computing, Fujitsu wants to make Fugaku’s insane computing horsepower available on demand, reports TechRadar. These plans are part of the company’s Fujitsu Computing as a Service (CaaS) initiative, which aims to give customers all over the world access to the most advanced computing tech in existence.

However, the company plans to start their service at home in Japan by October, with no rollout date for the rest of the world. The only thing they said is that the Americas, Europe, and Asia Pacific will get the service “at a later date.”

“CaaS will provide customers with seamless access to services on the public cloud to meet rapidly increasing computing demands, leveraging Fujitsu’s world-leading advanced computing technologies. In the future, we look to further expand the portfolio with access to technologies like quantum computing. move marks an important milestone toward democratizing high-performance and quantum computing and will play an important role in the achievement of Fujitsu’s Purpose: ‘to make the world more sustainable by building trust in society through innovation. ”

For now, the company will start taking pre-orders for a smaller-scale cloud service; one which will let customers use their own Supercomputer PRIMEHPC FX1000. This supercomputer, while not Fugaku, actually shares the same CPU that powers its bigger brother.

Sales in Japan for both public and general organizations have already started, and full delivery of the service is expected to occur in October — the same month when Fugaku’s power will be offered via the cloud.

Built as a joint project by Fujitsu and the Japanese scientific research institute RIKEN, Fugaku is considered the world’s current fastest supercomputer in terms of raw computing power. As per Fujitsu’s website, it has maintained the title for four consecutive terms against a slew of intense competition from other global supercomputers. 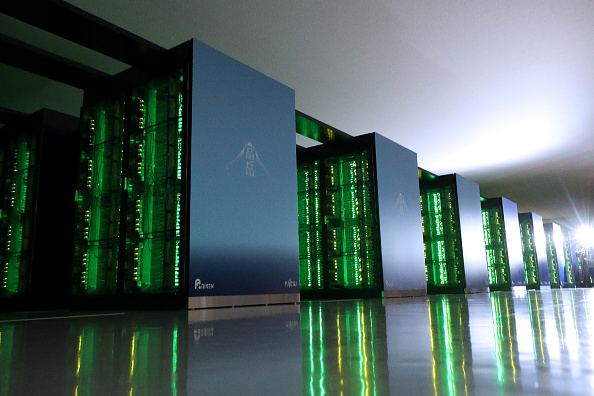 (Photo: STR / JIJI PRESS / AFP via Getty Images)
This picture taken on June 16, 2020 shows Japan’s Fugaku supercomputer at the Riken Center for Computational Science in Kobe, Hyogo prefecture. – The Fugaku supercomputer, built with government backing and used in the fight against the COVID-19 coronavirus, is now ranked as the world’s fastest, its developers announced on June 22, 2020. (Photo by STR / JIJI PRESS / AFP) / Japan OUT

But just how powerful is it? Well, this is where the numbers get insane. According to Nikkei Asia, the computer is able to deliver a computing speed of 442 petaFLOPS. While this might not sound too impressive, here’s a bit of perspective: a single petaFLOP is equal to 1,000 teraFLOPS, according to HP.

In comparison, a modern, high-end desktop made for gaming or productivity can produce several hundred gigaFLOPS to a few teraFLOPS. Modern consoles like the Xbox Series X, which are still technically computers in their own right, are capable of 12.15 teraFLOPS (via The Verge). Do the math, and you’ll see just how fast Fugaku really is.

It is this type of power that makes supercomputers immensely critical for applications such as scientific research, where tons upon tons of data need to be processed at the shortest amount of time.