AWS, Microsoft, and Google collectively harvested 65 percent of global spend on cloud computing in Q1 2022 and outgrew their competition to the extent that their collective dominance leaves rivals with only niches to explore.

So says US-based Synergy Research Group, which crunched the numbers from Q1 earnings data and found total revenue of $ 52.7 billion, with trailing twelve-month revenues of $ 191 billion.

Year on year growth across the cloud was 34 percent. That figure was topped by AWS, Microsoft and Google. But the research firm found smaller clouds grow at a slower pace – between ten and twenty percent. 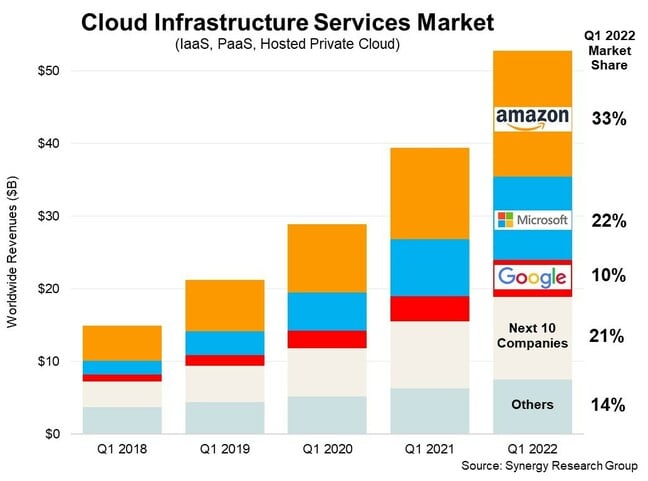 That’s still a booming market and a big opportunity, but Synergy’s chief analyst John Dinsdale suggested smaller clouds now must focus on “regional or service niches where they can differentiate themselves from the big three.”

This is almost certainly not a comforting message for the likes of Oracle and IBM, as both aspire to be full-service clouds across the infrastructure-as-a-service, hosted private cloud, and platform-as-a-service markets that Synergy measures.

Infrastructure-as-a-service and platform-as-a-service dominated the market, and the big three dominated those two services to an even greater extent than they do in other markets – holding 71 percent between them.

All of the above excludes China – a market in which local providers dominate and players from beyond the Middle Kingdom can only operate through local partners. Rival analyst firms’ assessments of some South-East Asian markets suggest the likes of Alibaba Cloud and Tencent Cloud have snuck into the top three providers – so the big three aren’t on top everywhere.

But Synergy can’t see challengers on the horizon.

“While the level of competition remains high, the huge and rapidly growing cloud market continues to coalesce around Amazon, Microsoft and Google,” Dinsdale observed. “Other cloud providers simply cannot match the scale and geographic reach of the big three market leaders.” ®