In yet another strong set of earnings results, semiconductor designer Advanced Micro Device, Inc (NASDAQ: AMD) reported $ 5.9 billion in revenue for its first quarter of the fiscal year 2022. AMD’s strong growth over the recent years has come primarily on the back of the personal computing segment, and over the course of time, the company has leveraged this to gain a strong footing in the enterprise segment as well. The release marks the first quarterly results after AMD’s mult-billion-dollar acquisition of Xilinx, Inc., which aims at solidifying the company’s portfolio for high performance computing. The revenue marks 71% annual growth, and it is accompanied by $ 786 million in net income, for another 22% annual growth.

A breakdown of AMD’s revenue reveals that the company’s enterprise segment, which deals with corporate customers and high performance computing (HPC), continues to maintain its growth trajectory. During the first quarter of 2022, AMD managed to rake in $ 2.5 billion in the segment, for a strong 88% annual growth. More remarkably, this was complemented by $ 881 million in operating income, for an eye popping 218% growth over last year’s first quarter.

Not only did AMD beef up its HPC presence by acquiring Xilinx, but the company also plans to acquire another company, Pensando, for $ 1.9 billion. Pensando develops cloud computing, networking, and other solutions for enterprise solutions. 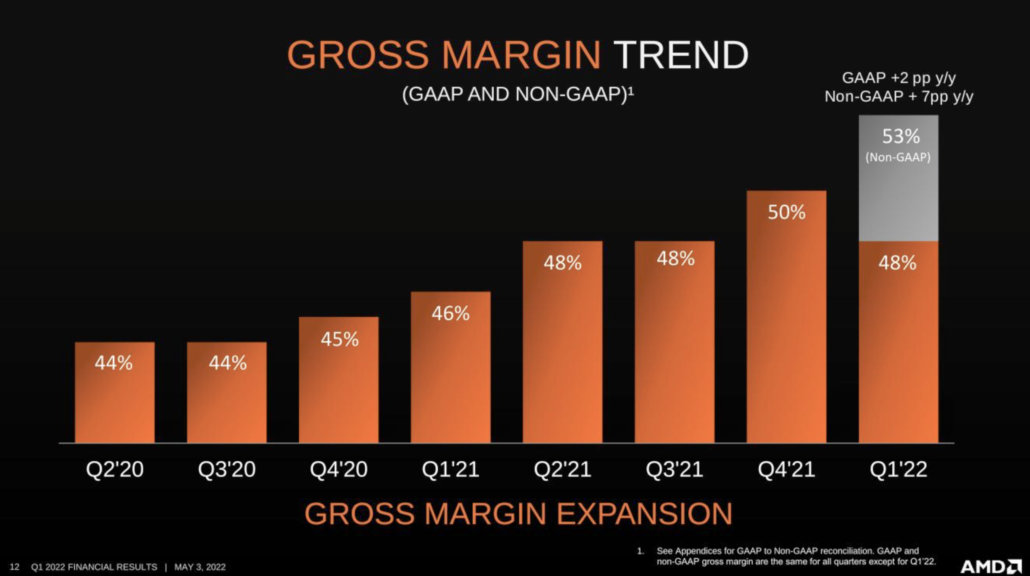 However, the Xilinx acquisition played a part in denting AMD’s gross margins for the quarter, with the GAAP margins dropping over Q4 but still growing over Q1 2021.

At the same time, AMD announced a $ 3 billion credit facility undersigned by Wells Fargo. Unlike a loan, which is generally paid in a lump sum, a credit facility allows the borrower to procure funds from the lender over an extended time period. AMD’s success in the financial world has seen the company pay off significant amounts of debt recently, and going forward with business expansion will cost the company.

As per the credit agreement, the proceeds will be used by AMD to:

The Borrower shall use the proceeds of the Extensions of Credit (i) to pay fees, commissions and expenses in connection with the Transactions and (ii) for working capital and general corporate purposes of the Borrower and its Subsidiaries; provided that no part of the proceeds of any of the Loans or Letters of Credit shall be used for purchasing or carrying margin stock (within the meaning of Regulation U of the FRB) or for any purpose which violates the provisions of Regulation U of the FRB .

For the current quarter, AMD aims to bring in $ 6.5 billion in revenue, to mark 69% annual growth. Equally impressive is the company’s projection for the full fiscal year, by the end of which it is aiming to bring in $ 26 billion in revenue. AMD’s revenue for the previous fiscal year stood at $ 16 billion for 68% growth, and the projected figures will mark a similar 69% growth.

The company’s shares are up by nearly 6% in aftermarket trading at the time of publishing. Year to date however the stock is down 39%, erasing most of its gains made last year. AMD’s peers, Intel Corporation and NVIDIA Corporation are down 15% and 35%, respectively, year to date.