When online retail behemoth Amazon.com (NASDAQ 🙂 reports its latest quarterly earnings today after the market close, investors should expect to see proof of the e-commerce giant’s growing dependence on its cloud and advertising divisions. Shares of Amazon closed Wednesday at $ 2763.30.

This trend was already apparent in the company’s previous when the Seattle-based internet retailer blew past estimates despite several risks for its core retail business, such as higher, supply-chain bottlenecks, and labor shortages.

While those headwinds gained strength throughout the recent quarter, investors shouldn’t ignore the success of Amazon’s diversification strategy, highlighted by the robust momentum in the company’s cloud and advertising units.

Sales from Amazon Web Services (AWS), which offers customers server capacity and software tools and generates a significant portion of the company’s operating profit, have been showing massive growth. In Q4, this unit showed sales of $ 17.8 billion, a 40% year-over-year increase, with an operating profit of $ 5.29 billion

Amazon’s digital advertising business, which competes with Alphabet’s (NASDAQ 🙂 Google and Meta Platforms’ (NASDAQ 🙂 Facebook, Instagram among other subsidiaries, grew by 32% from a year earlier. It was the first time the company disclosed advertising as a separate line item. Previously it was part of the “other” revenue category.

That’s why most Wall Street analysts remain bullish on the company’s long-term prospects despite the uncertain economic conditions that are hurting its stock performance.

In an Investing.com survey of 55 analysts, an outstanding 51 gave an “outperform” rating for the stock with a 12-month consensus price target that implies about 45.6% upside. 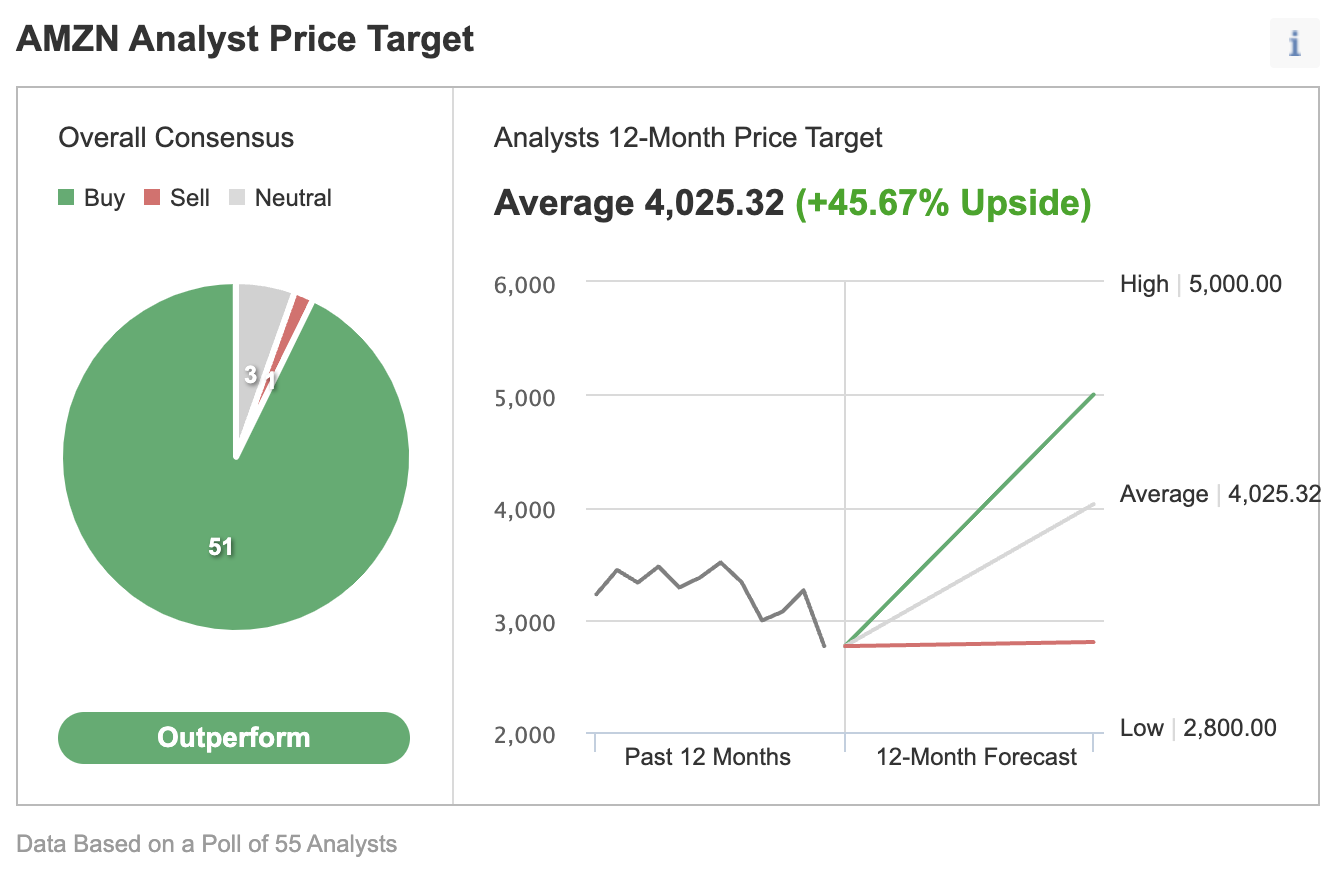 Bank of America, in a recent note, named Amazon its top pick for 2022, saying that the retail juggernaut should enjoy a “significant” expansion in profit margins from 2023 to 2025, helped by its cloud, advertising, and third-party marketplace.

In a note carried by CNBC, Evercore ISI’s Mark Mahaney noted that Amazon could “tap into a new leg” of revenue growth by building out international and brand advertising through products and offerings such as Twitch and Thursday Night NFL. His note adds:

Mahaney has an overweight rating on the stock and a target price of $ 4,300, implying an upside of 57% from Wednesday’s closing price.

The powerful momentum in Amazon’s cloud and advertising business will likely help the company fulfill or even surpass analysts’ expectations in today’s earnings report. These new growth drivers, combined with its still-dominant position in the e-commerce segment, make it an attractive long-term bet after its bearish spell this year.