When a super-successful company shares skyrocket, investors cheer. But at a certain point, some start wishing the stock price were just a bit lower. Why? Because an extremely high price makes it difficult for some investors to get in on the shares. But, of course, no one wants the stock to actually decline.

The solution is a stock split. The company lowers the price of each individual share – but offers current investors more shares. The company’s market value and the total value of each investor’s holding remains exactly the same. And the movement opens up the investment door to a broader range of individuals. It’s a win-win situation. Why buy companies that have done or plan a stock split? Because the need for a split usually means business has been booming. Let’s check out three such stocks you may want to add to your buy list.

Investors have been dreaming about an Amazon (AMZN 3.89% ) stock split for quite some time. The shares have soared 5,700% since their last such operation back in 1999. And last year, they reached a record high of more than $ 3,600. The company last week announced a 20-for-1 stock split. If shareholders approve, it will happen in early June.

But here’s why I like Amazon. The company’s annual revenue and profit have been climbing and bringing in billions of dollars for the past several years. 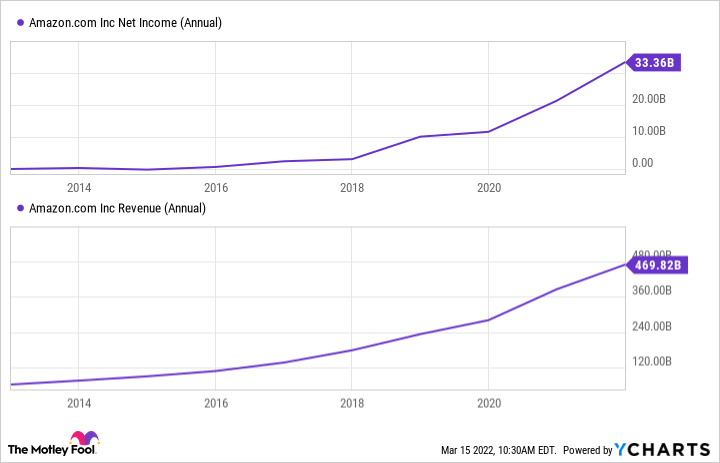 The online retail business and cloud computing unit Amazon Web Services (AWS) have driven gains. But these businesses’ growth is far from over. For retail, Amazon’s Prime subscription service keeps customers coming back with free shipping and many other benefits. The company grew members to more than 200 million worldwide in 2020. And in the most recent quarter, Amazon added “millions” more. AWS is the leading player in the cloud computing market – and represents more than 70% of Amazon’s operating income. All of this indicates there’s a lot more to come for Amazon.

Intuitive Surgical (ISRG 2.91% ) completed its stock split in the fall. The stock had climbed more than 300% over the previous five years. Since the start of this year, Intuitive has slipped more than 25%. But I see this as a buying opportunity for a company that’s proven itself – and has plenty of growth to come.

Surgeons use Intuitive’s Da Vinci robotic surgery system for various minimally invasive procedures. The coronavirus pandemic disrupted business at certain points over the past two years. That’s because many hospitals put these types of surgeries on hold. And hospitals focused more on handling COVID-19 than on investing in new surgical systems.

But if we set aside coronavirus disturbance, the company has generally grown profit and revenue in recent years. 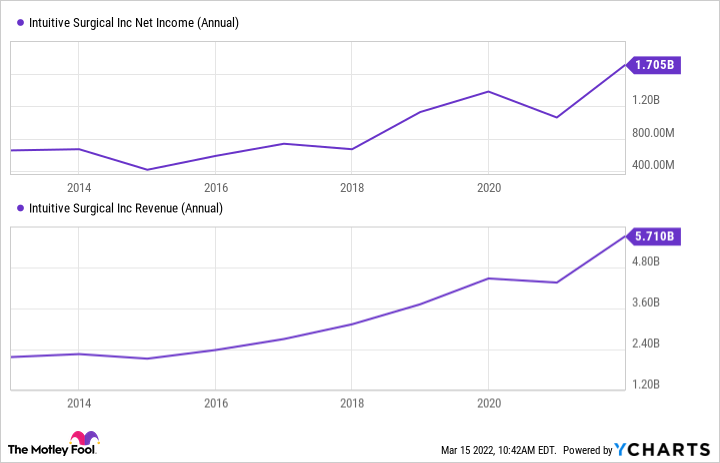 And business has clearly picked up as hospitals reschedule postponed surgeries. In the fourth quarter, worldwide procedures increased 19%. What’s interesting is Intuitive doesn’t only generate revenue from selling and leasing systems. In fact, it generates most of its revenue through the sales of accessories and instruments. That results in a regular revenue stream from regular customers.

Another reason to like Intuitive: Intuitive is the market leader in robotic surgery. This probably won’t change any time soon. Surgical robots are expensive. So, if hospitals using the Da Vinci system are satisfied, it’s unlikely they’ll switch to a rival one.

Alphabet (GOOG 3.11% ) (GOOGL 3.16% ), parent company of Google, earlier this year announced its plans for a 20-for-1 stock split. If shareholders approve, the split will happen in July. Like Amazon, Alphabet’s shares have sailed past $ 3,000 in recent times.

So, why should we believe Alphabet, at a lower price, will once again begin a spectacular increase? Alphabet makes most of its revenue through advertising – and growth is strong. In the fourth quarter, for example, Google advertising revenue climbed 33% year over year to $ 61.2 billion. Alphabet can also look to its cloud computing business for growth. Google Cloud holds a smaller market share than that of rival Amazon. But it still remains a solid player. Google Cloud revenue jumped 45% in the quarter. And the company is optimistic about the future. During the earnings call, Alphabet said it will continue to invest in Google Cloud “given the sizable market opportunity.” Moving forward, it’s also important to remember that Google holds more than 90% of the worldwide search engine market.

Alphabet has a track record of earnings performance. The company’s earnings have surpassed analysts’ expectations for at least the past four quarters. Right now, the stock is trading at 26 times forward earnings estimates – and that looks inexpensive considering Alphabet’s performance so far and prospects down the road.